An Adaptive Ecosystem Approach to Rehabillitation and Management of the Cooum River Environmental System in Chennai, India 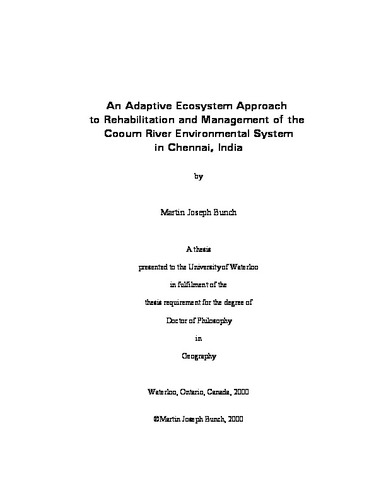 This research investigates the application of an adaptive ecosystem approach to the problem of the Cooum River and environs in Chennai (formerly Madras), India. The Cooum River is an extremely polluted urban stream that flows into the Bay of Bengal through the heart of Chennai, India's fourth largest metropolis. During the dry (non-monsoon) season, the upper reaches of the river are dry and flow in the river may be attributed primarily to the production of sewage by the city's population. The river is essentially a foul-smelling open sewer. Complexity of the problem is due as much to human factors (population growth, poverty, uncontrolled urban development, jurisdictional conflicts, modes of behaviour of the citizenry, and institutional culture) as to physical characteristics of the system (flat topography, tidal action, blockage of the river mouth by sand bar formation, and monsoon flooding). Uncertainty in the situation is both structural (regarding main processes and activities in the system and the nature of relationships among the various actors and elements), and parametric (having to do with scarcity, poor quality and restricted access to data). This work has drawn upon methods and techniques of Adaptive Environmental Management and Soft Systems Methodology to operate the ecosystem approach and address the problem. Specifically, this has involved a series of workshops which have brought together planners, researchers, NGOs, and other stakeholders in a participatory process oriented toward problem definition, system identification and conceptualization, determination of objectives for management, and the generation and exploration of management interventions. In addition, a central component of the program has been the development of a loosely-coupled GIS, environmental simulation model, and a decision support module. This is based upon a framework provided by participants in the first workshop in the series, and operationalizes a common understanding of the system. In addition to generating new insight into the nature of the problem situation, the research has provided a potentially useful tool to planners, managers and researchers in Chennai in the form of a GIS database and decision support system (DSS). Aside from the tool itself, it was found that the process of developing a conceptual model, and attempting to represent this in the DSS has made a significant contribution to understanding of the Cooum system. In particular, this process forced assumptions to be stated explicitly and publically, highlighted areas of uncertainty and led to new understanding in participants' conception of the problem situation. The program of research also provided a much needed forum for open debate and exchange of information which was removed from the restrictive institutional culture of government departments.