Urban Regeneration through Public Space: A Case Study in Squares in Dalian, China 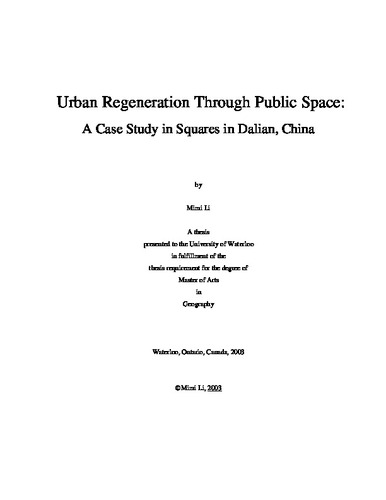 Urban regeneration has been accompanying urban development since the earliest human settlement, and was emphasized after the World War Two. Several decades' experience and billions of dollars forced the decision makers to realize the importance of urban image, quality of life, and urban environment, which were recognized as prerequisites and catalysts for the economic development of cities. In this circumstance squares have been involved in urban regeneration projects to create symbol of the city and to provide space for residents, and have been proved to be effective for urban regeneration by many western countries. Dalian, a coastal city in Northeast China presented to be a successful case in the country in involving the construction of squares in regenerating central city to transform the city from a heavy industrial city to a garden city. In the circumstance of urban beautification movement in China, which began in 1990s and was partly symbolized by the construction of fancy, large, but under-used squares, a study on the success of Dalian is indeed needed. This study shed light on the major concerns of Dalian government to create squares in central city, the land use issues of squares, the usage on the squares, and the perception of squares by users. Through the application of key-informant interview, questionnaire survey, and onsite observation, the paper concluded that the construction of squares was part of the urban regeneration policies in Dalian, the major concern was to provide local residents with public open space to enjoy public life, and to improve urban environment. The construction of squares was carefully and systematically planned, the location of squares was pertinent to the land use pattern nearby and to the function of each of the three districts in central city, the squares are fully utilized, and are appreciated by both local residents and tourists. The squares were considered as catalyst in urban environment improvement, urban image enhancement, and tourism and economic development from the perspective of government officials, local residents, and tourists. Implication was provided for other cities in China based on the major findings and reviewed literature, future research opportunities were also suggested.