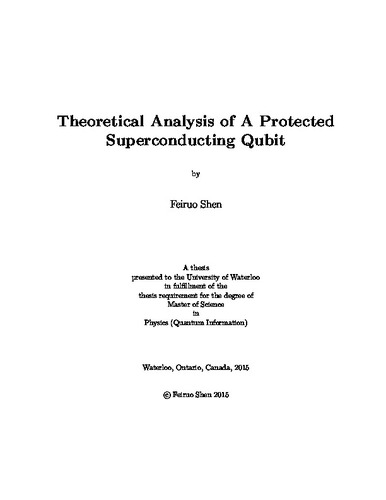 In the past few decades, quantum computation has become an active area of research due to prospects to execute high-efficiency quantum algorithms. Quantum algorithms promise to accelerate many practical computation problems, but they can not be managed on classical computers. While a vast amount of time and effort has been invested into this field, executing a quantum algorithm is still a difficult task. One major obstacle is decoherence, which can be induced by the environment. To better protect information against noises, designs for a quantum computer have quickly improved. However, many new designs lack systematic analysis. In the first part of the thesis, we investigate a type of superconducting-circuit-based qubit design proposed recently. The qubit, inspired by the current-mirror effect, is called the "zero-pi qubit". In Chapter 2, we derived an approximated model through concrete mathematical calculations and simulations of the zero-pi qubit. The model is concise and accurately describes the qubit system. Based on the model, we further estimate the decoherence time of the qubit. The dephasing time due to the flux noise and the charge noise exceed 40 s, and the relaxation process is well-protected against flux noise and charge noise. In the second part of the thesis, Chapter 3, we explore the qubit control in the strong driving regime. Driving a qubit with a strong signal is an approach to shorten the operation time, thus suppressing the influence of the decoherence. We achieve strong driving condition experimentally and observe complicated qubit dynamics, which is not predicted by any conventional model. We then propose a model based on Floquet theory which accurately describes the dynamics of the qubit.