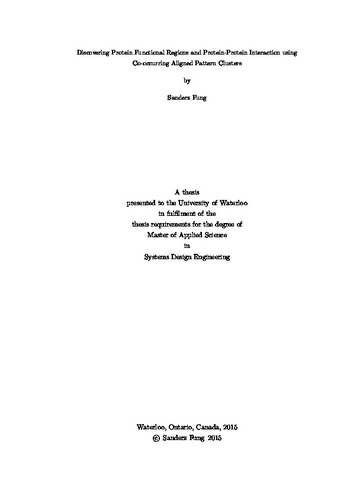 Bioinformatics is a rapidly expanding field of research due to multiple recent advancements: 1) the advent of machine intelligence, 2) the increase of computing power, 3) our better understanding of the underlying biomolecular mechanisms, and 4) the drastic reduction of biosequencing cost and time. Since wet laboratory approaches to analysing the protein sequencing is still labour intensive and time consuming, more cost-effective computational approaches for analyzing protein sequences and their biochemical interactions are crucial. This is especially true when we encounter a large collection of protein sequences. Aligned Pattern CLustering (APCL), an algorithm which combines machine intelligence methodologies such as pattern recognition, pattern discovery, pattern clustering and alignment, formulated by my research group and myself, is one such technique. APCL discovers, prunes, and clusters aligned statistically significant patterns to assemble a related, or specifically, a homologous group of patterns in the form of an Aligned Pattern Cluster (APC). The APC obtained is found to correspond to statistically and functionally significant association patterns, which corresponds as conserved regions, such as binding segments within and between protein sequences as well as between Protein Transcription Factor (TF) and DNA Transcription Factor Binding Sites (TFBS) in many of our empirical experiments. While several known algorithms also exist to find functionally conserved segments in biosequences, they are less flexible and require more parameters than what APCL requires. Hence, APCL is a powerful tool to analyze biosequences. Because of its effectiveness, the usefulness of APCL is further expanded from the assist of discovering and analyzing functional regions of protein sequences to the exploration of co-occurrence of patterns on the same sequences or on interacting patterns between sequences from the discovered APCs. Two new algorithms are introduced and reported in this thesis in the exploration of 1) APCs containing patterns residing within the same biosequences and 2) APCs containing patterns residing between interacting biosequences. The first algorithm attempts to cluster APCs from APCs that share patterns on the same biosequences. It uses a co-occurrence score between APCs in a co-occurrence APC pair (two APCs containing co-occurrence patterns) to account for the proportion of biosequences of co-occurrence patterns they share against the total number of sequences containing them. Using this score as a similarity measure (or more precisely, as a co-occurring measure), we devise a Co-occurrence APC Clustering Algorithm to cluster APCs obtained from a collection of related biosequences into a Co-Occurrence Cluster of APCs abbreviated by cAPC. It is then analyzed and verified to see whether or not there are essential biological functions associating with the APCs within that cluster. Cytochrome c and ubiquitin families were analyzed in depth, and it was validated that members in the same cAPC do cover the functional regions that have essential cooperative biological functions. The second algorithm takes advantage of the effectiveness of APCL to create a protein-protein interaction (PPI) identification and prediction algorithm. PPI prediction is a hot research problem in bioinformatics and proteomic. A good number of algorithms exist. The state of the art algorithm is one which could achieve high success rate in prediction performance, but provides results that are difficult to interpret. The research in this thesis tries to overcome this hurdle. This second algorithm uses an APC-PPI score between two APCs to account for the proportion of patterns residing on two different protein sequences. This score measures how often patterns in both APCs co-occur in the sequence data of two known interacting proteins. The scores are then used to construct feature vectors to first train a learning model from the known PPI data and later used to predict the possible PPI between a protein pair. The algorithm performance was comparable to the state of the art algorithms, but provided results that are interpretable. The results from both algorithms built upon the extension of APCL in finding co-occurring patterns via co-occurrence of APCs are proved to be effective and useful since its performance in finding APCs is fast and effective. The first algorithm discovered biological insights, supported by biological literature, which are typically unable to be discovered solely through the analysis of biosequences. The second algorithm succeeded in providing accurate and descriptive PPI predictions. Hence, these two algorithms are useful in the analysis and prediction of proteins. In addition, through continued research and development to the second algorithm, it will be a powerful tool for the drug industry, as it can help find new PPI, an important step in developing new drugs for different drug targets.