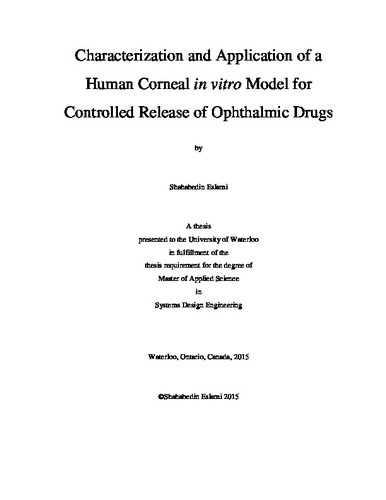 The cornea acts as a transparent shield protecting the eye from germs, dust and pathogens as well as regulating the ocular environment by controlling the diffusion of external substances like oxygen or drugs via the tear film into the intraocular tissues. The design and development of an intraocular-drug delivery device highly depend upon the understanding of the interactions between the biological system of the eye and the drug-ophthalmic material complex. In vivo models have been used in clinical studies as the necessary and most valid testing platforms for regulatory authorities, but animal experiments have always been widely criticized for ethical and economical reasons. Furthermore, when studying interactions in the eye environment, using animal models has other disadvantages such as difference in blinking patterns, tear composition, and organ size when compared to the human eye. Therefore, in vitro cell culture models using human cells have been considered as a powerful pre-screening tool for drug testing to study interactions with the ocular tissue. In vitro models also provide an experimental environment, in which each parameter can be controlled. With a lower complexity level and less variability, in vitro models allow gaining a better understanding of the parameters involved in the drug delivery system. Using eye drops for ocular drug delivery to the anterior section of the eye is a significant challenge due the rapid washout in tears and the corneal barrier to drug diffusion. Therefore mimicking this environment in vitro can help in designing more robust drug delivery system for the front of the eye. This research focuses on the application and characterization of an in vitro human corneal model which mimics in part the in vivo environment to assess corneal interaction with the drug/biomaterial complexes. In this project, an in vitro model using human corneal epithelial cells is used to characterize the drug release profile and transport from commercially available contact lenses. Three model drugs for treatment of glaucoma, eye inflammation and infection respectively were tested in combination with two commercial contact lenses with different surface chemistry and their release profiles were measured. The effects of biological transporters on the controlled release systems were investigated. The role of organic anion transporter protein OATP 2A1 (prostaglandin transporter) in transcellular transport of Latanoprost was characterized and the presence of its gene in the HPV16 E6/E7 immortalized corneal epithelial cell line was verified by real-time polymerase chain reaction. To assess the role of OATP 2A1, transporters were inhibited by Diclofenac sodium and the release kinetics of Latanoprost from Pure Vision® (balafilcon A) and Acuvue Oasys® (senofilcon A) contact lenses in three in vitro conditions with live corneal cells monolayer, fixed epithelial cells and transporter inhibited epithelial cells were studied. The presence of corneal epithelial cells in vitro had a significant effect on release kinetics of Latanoprost resulting in a zero-order release profile. Complete inhibition of the OATP 2A1 transporter reduced the release rate of Latanoprost by 30% and 52% from balafilcon A and senofilcon A respectively. Comparison between live, fixed and transport inhibited models indicated that Latanoprost transport occurred mainly through the active transcellular pathway but was not mediated only by OATP 2A1. Other transporters might be involved in the transport and further research is required to identify these. The effect of initial loading concentration of Latanoprost on release rate and amount of drug eluted from contact lenses was also investigated. Reduction in initial loading concentration of the drug increased the released percentage of the drug from 6.9% to 14.1% for balafilcon A and from 11.4% to 57.3% for senofilcon A. Both silicone hydrogel contact lenses, regardless of initial loading concentrations, released Latanoprost at above therapeutic daily dose up to 96 hours with zero-order constant rate. The release kinetics of two hydrophilic ophthalmic drugs, Ciprofloxacin HCl and Timolol Maleate also from the soft contact lenses were evaluated in the corneal in vitro model over 48 hours. The effect of corneal epithelial barrier on the release kinetics of these hydrophilic drugs was evaluated. The release kinetics of hydrophilic Ciprofloxacin HCl and Timolol maleate followed a first-order rate. The presence of corneal epithelial cells in vitro had no significant effect on the release rate of hydrophilic drugs. However, presence of cells (live or fixed) acted as a diffusion barrier by decreasing the amount of Ciprofloxacin released from silicone hydrogel contact lenses compared to no-cell in vitro model. No significant difference in released amount of Timolol was observed between live, fixed and no cell in vitro models Our results further confirmed the effect of chemical interaction between drug molecules and contact lens polymer on a controlled release system and the importance of selecting the appropriate in vitro model. Testing conditions and presence of biological barriers provided by cells can have a significant impact on release profile and provided a more realistic test platform for studying the release kinetics for the ocular environment. All in all, this thesis confirms the importance of proper selection of in vitro test models for the assessment of ocular drug delivery system and suggests that commercially available silicone hydrogel ocular materials may be used effectively for the release of hydrophobic therapeutics.

Shahabedin Eslami (2015). Characterization and Application of a Human Corneal in vitro Model for Controlled Release of Ophthalmic Drugs. UWSpace. http://hdl.handle.net/10012/9852