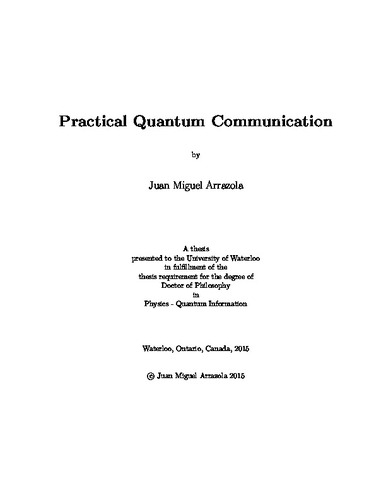 Current communication networks are based on classical physics and classical information-processing. However, for nearly a century, we have known that at its most fundamental level, the universe is governed by the laws of quantum mechanics. With quantum communication, new possibilities arise in our capabilities to transmit and process information which, in many cases, lead to advantages compared to what is classically possible. The entire scope of tasks for which quantum communication can offer improvements has not yet been fully explored, but several quantum protocols are known that can either perform tasks which are impossible with classical resources or can outperform classical protocols. These quantum protocols are well understood from a theoretical point of view, but many of them have never been demonstrated in practice. Thus, in the context of quantum communication, there is a significant gap between theory and experiment that must be removed in order to harness the advantages provided by quantum mechanics in a practical setting. In this thesis, we develop a series of tools for developing and testing practical quantum communication protocols. Our main technique is a theoretical reformulation of existing quantum communication protocols that converts them into a form in which they can be demonstrated with existing experimental techniques. More precisely, they can be implemented using only coherent states of light and linear optics circuits while still retaining the crucial properties of the original abstract protocols. We use this result to construct practical protocols for the Hidden Matching problem and quantum fingerprinting. In the case of quantum fingerprinting, we make a thorough analysis of the role played by experimental errors and show that our practical protocol can still be implemented in the presence of these imperfections. In fact, we report a proof of concept experimental demonstration of a quantum fingerprinting system that is capable of transmitting less information than the best known classical protocol for this problem. Our implementation is based on a modified version of a commercial quantum key distribution system using off-the-shelf optical components over telecom wavelengths, and is practical for messages as large as 100 Mbits, even in the presence of experimental imperfections. Similarly, in the context of cryptography, we propose a multiparty quantum signature protocol that can be implemented from any point-to-point quantum key distribution network, proving its security against forging, repudiation and non-transferability. Crucially, since quantum key distribution is already a practical technology, so is this protocol. However, unlike other tasks in quantum communication, there has not been significant theoretical work on establishing a security model for quantum signature schemes. Consequently, we also constructed a security framework for these schemes and proved several properties that these protocols must satisfy in order to achieve their security goals. Finally, in addition to proposing new practical protocols, we provide a reliable data analysis technique to verify an important property of many quantum communication protocols: the presence of entanglement. Our technique is based on entanglement witnesses and it does not require the specification of a prior distribution nor the assumption of independent measurements. The technique is suitable to be used with nonlinear entanglement witnesses, which we show can be constructed from any linear witness and evaluated from the same experimental data. We also develop numerical tools necessary to employ this approach in practice, rendering the procedure ready to be applied to current experiments. We demonstrate this by analyzing the data of a photonic experiment generating two-photon states whose entanglement is verified with the use of an accessible nonlinear witness.