Achieving Cultural Diversity in Wilderness Recreation: A Study of the Chinese in Vancouver 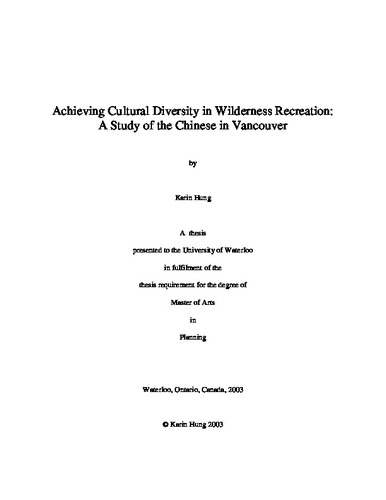 As Canada welcomes immigrants from around the world, planners increasingly strive for policies and initiatives that meet culturally diverse needs. In Greater Vancouver, British Columbia, park planners have directed more attention to wilderness use by ethnic minority groups, particularly the Chinese population. Nowhere in Canada are people of Chinese ancestry more prominent than in Greater Vancouver, where they comprise 47% of the visible minority population and 17% of the total population. However, the rate of Chinese participation in wilderness recreation is less than that of the general population. This exploratory study examines the cultural nuances and institutional barriers that impede Chinese participation in wilderness recreation activities. It is primarily based on 51 in-depth interviews with members of the Chinese community in Greater Vancouver during 2002. Recruitment was by a hybrid convenience-purposive-snowball sampling method, which resulted in a non-random sample. Interview questions addressed views about wilderness, outdoor recreation and wilderness experience, awareness of local recreation opportunities, means to retrieve park information, and preferences for park settings and facilities. The Vancouver Index of Acculturation was used to measure participants' levels of acculturation. Interviews were tape recorded and transcribed, and information from field notes and transcripts were organized into main themes and triangulated with secondary data sources for analysis. Results indicate that Chinese who are more acculturated to Canadian culture ('High Mainstream Chinese') visit a greater number of parks and are willing to travel a further distance to access them. They also tend to visit parks more often, stay longer, and tend to be attracted to more physically demanding or 'hard adventure' activities, whereas less acculturated individuals ('Low Mainstream Chinese') are inclined to more passive outdoor activities. The study points to reasons that explain why Low Mainstream Chinese ? particularly recent immigrants ? are participating less in wilderness recreation. Factors include fear of the wilderness environment, preference for more highly developed parks, a lack of awareness of wilderness opportunities, and inadequate access to park information. Subtle aspects of the Chinese subcultural identity, such as importance of cleanliness, emphasis on academics, priorities on work, and clannishness, also play a role in Chinese under-participation. Thus if park planners want to facilitate Chinese use of designated wilderness areas, they should address issues such as safety, level of park development, availability of information, and awareness of wilderness opportunities in a culturally sensitive way. Doing so would promote more equitable access to a public resource. Increased awareness and appreciation of wilderness by ethnic minority groups may also help garner political support for future conservation initiatives and build a stronger local economy.