[in]formal Pattern Language - A guide to Handmade Improvitecture© in Cairo 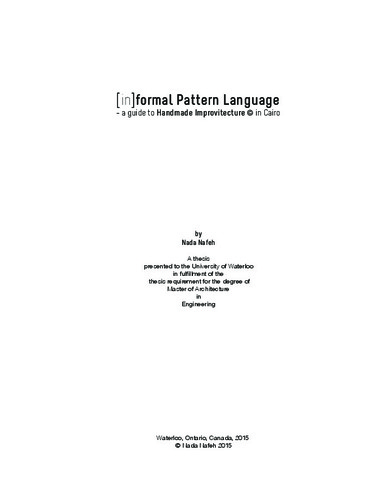 The thesis is situated in Cairo, a city with 64% of the population living in informal settlements. Cairo‘s informality transcends, however, the boundaries of these areas and manifests itself daily in spatial and temporal appropriations: street vendors invading Downtown Cairo and formal urban pockets, construction of barricades, security systems and high-way developments by community members taking charge; improvising their way through the battle for resources and social justice, and claiming their “right to the city.“ In contrast to many misconceptions, informal settlements in Cairo don‘t depict the typical characteristics of slums and respond to the needs of the lower-middle class. The uncontrolled expansion of informal settlements on scarce agricultural land in Egypt constitutes a nation-wide environmental and self-sufficiency problem. Moreover, it triggers the following issues: lack of open green space, insufficient infrastructure, accessibility and garbage accumulation. Forced eviction and relocation of informal communities, undertaken by the government, result in their further marginalization, loss of vitality and lack of communal responsibility. Participatory programs sometimes have the pitfalls of offering short-term solutions because the main roles are still played by experts. In this context, where the informal has become mainstream, the thesis raises the following questions: How can the [in]formal be redefined? What is the role of the architect in self-organized communities? What are the tools to optimize current and future informal growth, while empowering communities and celebrating their improvisation? The thesis introduces the term Improvitecture© (improvisation + improvement + architecture) as a catalyst for development and the architecture from, and for, informality. Improvitecture redefines traditional borders between architect and community member, planned and improvised, and, finally, formal and informal. Inspired by Christopher Alexander’s A Pattern Language, and through the case study of Ard El Lewa, the thesis proposes a process and an [in]formal Pattern Language manual, which serves as a guide for community members, designers, planners and officials to improve [in]formal areas and embed productive green spaces, sustainability, communal responsibility and ownership in the resident‘s daily life. Within the framework of an open-source website, collaborative sessions, a workshop with children and an exhibition on site, community members, architecture students and experts collaboratively broke down the complex physical reality of [in]formal settlements and their urban narratives into patterns. Patterns were then analyzed and combined with a set of tools and in-situ design solutions, which optimize them and allow for a more sustainable built environment. To further document and compile patterns for the manual, the wider community is encouraged to take part in this on-going open process by completing a pattern template and/or posting geo-tagged images of patterns to the website, which will then appear on an interactive map and catalogue that communicate the identify of [in]formal areas. For further details on the [in]formal Pattern Language initiative, visit www.informalpatternlanguage.com