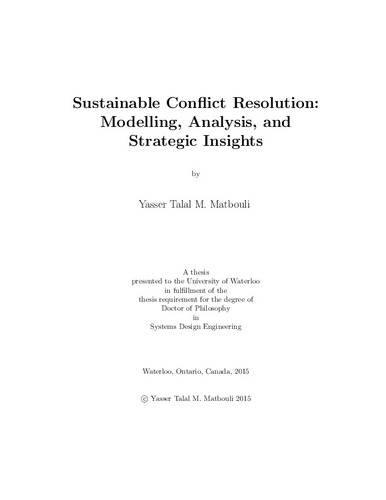 New methodological contributions for modelling and analyzing conflicts evolving over time are developed to provide strategic insights into the sustainability of equilibria. More specifically, key characteristics of evolving conflicts are identified in order to recognize a long-term conflict. A unique procedure for assessing robustness of equilibria is introduced to measure the possibility of deviation from these potential resolutions. By considering partial achievement of an option or course of action, attempts for a decision maker to improve an equilibrium situation can be formally taken into account. As a consequence of these advancements, certain challenges found in an ongoing Canadian energy conflict can be formally investigated, better understood, and eventually resolved. There have been many successes in the modelling and analysis of strategic conflicts using the Graph Model for Conflict Resolution. But, as illustrated by the re-occuring Great Canadian Hydroelectric Power conflict, many important obstacles remain. This conflict, between the Canadian province of Newfoundland and Labrador (NL) and the province of Quebec (QC), continued for over half a century, passing through several distinct stages and raising questions that are difficult to answer using the standard graph model approach. These questions are addressed in this thesis, and the new models and techniques developed are then demonstrated using the NL-QC conflict. A framework for conflict characterization is suggested to help analysts understand the different stages of a conflict that evolves over time. Particularly problematic are instances when a conflict reaches an equilibrium, maintains it for some time, and then re-starts and shifts to another equilibrium. Traditional conflict resolution models, which analyze only a single round of a conflict during a specific period of time, cannot explain such observations. The conflict characterization is specifically designed to provide input parameters for models of conflicts that evolve over time. A new representation, the enhanced preference graph model, includes decision makers' preferences, allowing for an expeditious and intuitive interpretation of some stability questions. One major issue is the sustainability of equilibrium. In a conflict that continues for half a century, it is possible for an equilibrium to be reached, maintained for a few decades, but then to fall apart. Can the resolution of strategic conflicts be made sustainable? The concept of Level of Freedom is introduced to provide a measure of equilibrium robustness that facilitates the ranking of equilibria based on their relative robustness and offers insight into this form of long-term stability. In a graph model, a decision maker's strategy is a selection of his or her options. Hence, an option is either taken or not selected within a given state. To make a graph model easier to link to reality, a modelling structure is proposed that allows binary (two-level) options to be replaced by options with more than two levels. This new structure facilitates the representation of preference in the modelling stage and the understanding of conflict evolution within the analysis stage. Combined with concepts relating to the robustness of equilibria, the utilization of multi-level options makes a graph model more expressive of reality and easier to understand.