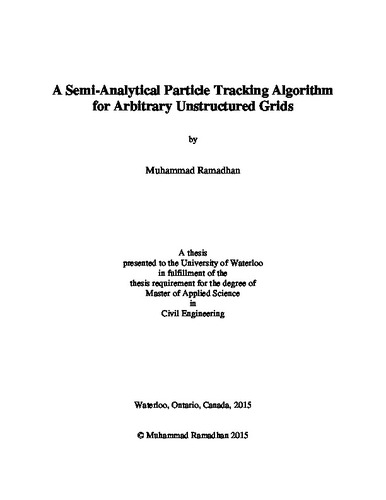 Semi-analytical particle tracking methods are broadly used in determining advective transport within groundwater flow models. The Pollock method is currently implemented in the USGS model MODPATH as a semi-analytical particle tracking algorithm for structured grids in MODFLOW. However, this method is not valid for grid cells with irregular geometry, and new methods are needed to effectively represent local flow fields within arbitrarily shaped grid cells for tracking particles. There are currently two particle tracking methods that can create pathlines in arbitrary unstructured grids: 1) the SSP&A method and the method introduced by Painter et al. (2012). The SSP&A method uses local universal kriging interpolation of a MODFLOW hydraulic head solution in order to determine the particle velocity using head changes. The method by Painter et al. uses unconstrained least squares method on interior cells and constrained least squares method on boundary cells to calculate the particle velocity. However, these methods generate local interpolation-based velocity fields that do not respect the mass balance of the cell. Here, we develop an accurate semi-analytical particle tracking method for the new MODFLOW-USG, which uses a control volume finite difference (CVFD) approach for arbitrary unstructured grids. This particle tracking method (the Waterloo method) is based on a locally analytical Taylor Series reconstruction of the local velocity, which can be used to generate pathlines of particle movement using an Euler or high-order Runge-Kutta scheme. The approach is valid for any cell geometry and may be used for both steady-state and transient simulations, while still respecting the mass balance of the cell. By following the particle path from cell to cell, this method can trace the movement of a particle through any arbitrary unstructured multidimensional flow field generated from a CVFD model. The pathlines generated by the Waterloo method in rectilinear cells are compared to the pathlines by the Pollock method. The results show less than 1% differences in terms of the spatial and temporal distributions of the particle exit locations. The robustness of the Waterloo method is supported by its ability to handle complex flow field within a model that contains extreme heterogeneity and zero-hydraulic conductivity zones. The approach also bypasses the “weak sink” problem by explicitly representing the local flow fields near wells or controlled by distributed leakage/recharge. Furthermore, this semi-analytical method is capable of handling multiple, off-center wells located anywhere within one cell.