Georgian Britishness: How "Britishness" was Defined During the Reigns of the First Three Hanoverian Kings (1714-1820) 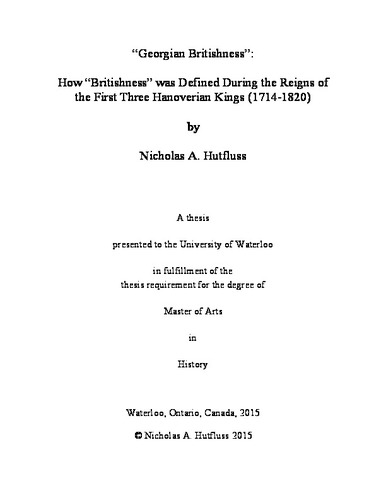 This thesis explores the development of “Britishness” or a British identity during the “long” eighteenth century in Great Britain during the reigns of the first three Hanoverian kings, also known as the “Georgian Kings”, George I (r. 1714-27), George II (r. 1727-60), and finally George III (r. 1760-1820) – looking at how the term British as an identity came to be fostered through the British monarchy, Redcoat regiments within the British Army, neo-Palladian architecture, and the development of British music. In order to understand how “Britishness” came to be, this thesis takes on a chronological approach by examining the evolution of the British monarchy under the governance of the three Georgian Kings, and how by the reign of each Georgian king came forth a gradual crystallization of a British identity, which is illustrated in the military, architecture and music. With this came the stability of the British monarchy, which is currently, the reigning monarchy of the present-day United Kingdom.