The Practical Realization of Quantum Repeaters: An Exploration 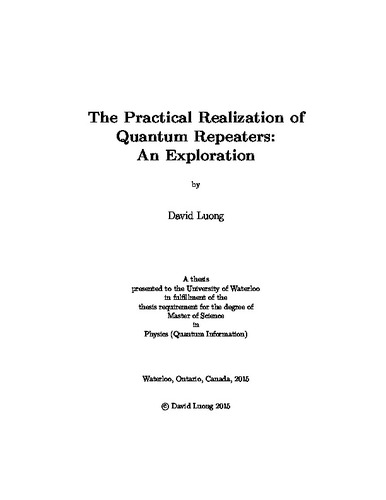 This thesis is an exploration of quantum repeaters from a practical point of view. Quantum repeaters are devices which help improve the quantum communication capacity of a lossy bosonic channel (which include photonic channels such as optical fiber) beyond what is possible using a purely lossy channel. The analyses in this thesis involve modeling the experimental imperfections inherent in the various devices which comprise a quantum repeater, then combining these models to calculate various quantities of interest. Two systems are analyzed in this thesis. One is a simple quantum repeater, while the other is a potential building block for more complex quantum repeaters. The simple quantum repeater scheme can be implemented with currently available technology. In it, two parties perform quantum key distribution (QKD) by exchanging photons with two quantum memories placed between them. Its secret key rate ideally scales as the square root of the transmittivity of the optical channel, which is superior to QKD schemes based on direct transmission because key rates for the latter scale at best linearly with transmittivity. Taking into account imperfections in the setup, such as detector efficiency and dark counts, we present parameter regimes in which our protocol outperforms protocols based on direct transmission. We find that implementing our scheme with trapped ions is a promising way to reach the necessary parameter regimes, and that the regimes are easier to reach if the optical channels are very lossy. The creation of entanglement between two quantum memories is an important building block in some quantum repeater schemes. We consider a specific quantum memory consisting of an atom trapped in a cavity. The system allows a CNOT operation to be performed between an atom and a photon. We study three methods for taking advantage of this to entangle two atoms: (1) interacting a coherent pulse with each atom, then performing an entangling measurement on the pulses; (2) interacting a single coherent pulse with each atom sequentially; (3) emitting an entangled photon from one atom and interacting it with the other atom. The success probability of each method is compared, as well as the quality of the entangled states produced by each one, taking into account imperfections which appear in a specific experimental implementation of such memories. We find that there is a tradeoff between success probability and entangled state quality when coherent states are used, and that method 3 provides higher-quality entangled states than is possible with the other two methods.