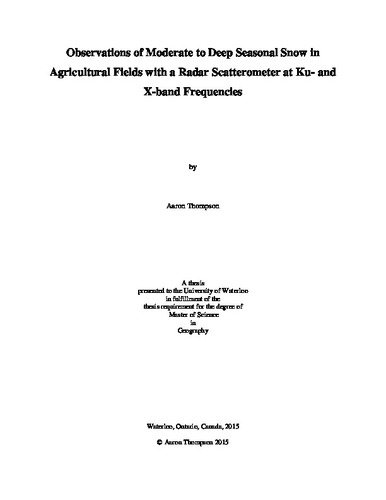 The water contained within a snowpack, or the snow water equivalent (SWE), is very important to the hydrological cycle and to populations who depend on it for drinking, agriculture and industry. Measuring SWE over large areas is therefore important, but difficult given the scale of such an endeavor. Radar remote sensing of snow offers the promise of measuring SWE remotely but before we can do so, we must better understand how microwaves and snow interact. This thesis investigates the interaction of Ku- and X-band radar with moderate to deep seasonal snow in agricultural fields over two winters in Ontario. The University of Waterloo Scatterometer (UW-Scat) was used to make measurements of both snow-covered and snow-free fields in Maryhill and Englehart Ontario spanning a range of SWE up to 186 mm. In the 2013-14 season, 4 observations were made in Maryhill. In the 2014-15 season 3 sites were revisited over 6 dates in Maryhill and 3 sites were visited in Englehart. Accompanying the radar observations, in situ observations of snowpack properties including depth, density, stratigraphy, and grain size estimation were made at each site. Sensitivity to SWE was observed at Ku-band but not at X-band. An upper limit of sensitivity was observed around 140 mm after which point, Ku-band backscatter no longer responded to increasing SWE. However an investigation of seasonal depth hoar evolution suggested that the presence of depth hoar layers within the snowpack was the primary influence on backscatter response. Polarimetric data indicated the signal from early season, low-accumulation snowpacks was driven by vegetation where present and this influence decreased with further accumulation of snow. The major contribution of this study is the identification of depth hoar layers as a driver of backscatter response. This outcome points the way to further research on the influence of depth hoar, especially the mechanisms by which it exerts influence on the signal. Another contribution of this study is the identification of early-season influence of agricultural vegetation on backscatter through the use of polarimetric information.

Aaron Thompson (2015). Observations of Moderate to Deep Seasonal Snow in Agricultural Fields with a Radar Scatterometer at Ku- and X-band Frequencies. UWSpace. http://hdl.handle.net/10012/9833