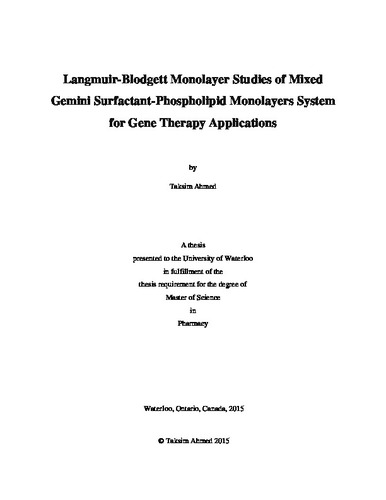 Gene delivery relies upon the encapsulation of a gene of interest, which is then ideally delivered to target cells. For gene therapy applications, viral vectors are the most efficient vectors currently being studied, accounting for more than 67% of ongoing clinical trials, however, they have several potential disadvantages, chief among them being safety concerns. In contrary, non-viral vectors have advantages over viral vectors. In the first chapter we have reviewed non-viral gene therapy using gemini surfactants which is an unique approach to medicine that can be adapted towards the treatment of various diseases. The chemical structure of the surfactant (variations in the alkyl tail length and spacer/head group) and the resulting physicochemical properties of the lipoplexes are critical parameters for efficient gene transfection. Moreover, studying the interaction of the surfactant with DNA can help in designing an efficient vector and understanding how transfection complexes overcome various cellular barriers. This chapter provides an overview of the various types of gemini surfactants designed for gene therapy and their transfection efficiency, with a focus on the novel methods (Langmuir Blodgett monolayer studies, AFM, DSC, ITC, SAXS) used to understand their interaction with DNA. The lack of understanding of how DNA influences the arrangement of vector components during the complexation of DNA, as well as their interaction with biological membranes is still a major barrier faced by non-viral vectors. Hence the aim of work in this project is to characterize the arrangement of the gemini surfactants and phospholipids that make up the transfection vector (both in the presence and absence of DNA) as well as the effect of these components on model biological membranes using Brewster’s Angle Microscopy (BAM), Atomic force microscopy (AFM), Kelvin probe force microscopy (KPFM) and Polarization Modulated Infrared Reflectance Absorption Spectroscopy (PM-IRRAS). Our current project focuses on gemini surfactants 16-7-16 and 16-7NH-16 or mixed gemini surfactant and helper lipid (DOPE) interaction at the air-water interface in the presence or absence of DNA. According to the surface pressure- area (π-A) isotherm, the 16-7NH-16 based systems formed the most stable monolayer in all pHs (pH 4, 7 and 9) compared to 16-7-16 based systems. The observed monolayer remained mostly in the liquid expanded (LE) or liquid expanded-liquid condensed (LE-LC) phase as evident from the compressibility modulus values. DOPE causes condensation in the mixed gemini/DOPE/DNA system in which antagonistic mixing behavior of DOPE is observed. Moreover, the BAM images showed fibril structures of the 16-7NH-16/DOPE/DNA system at pH 4, which was further confirmed by the AFM and KPFM studies. This signifies the electrostatic interactions between the positively charged gemini quaternary amine head group with the negatively charged phosphate group of DNA molecules. The PM-IRRAS study revealed that the complex system (gemini/DOPE/DNA) undergoes several interactions, among them the electrostatic, ion-dipole and hydrophobic interaction is the major factor playing the role in the interactions. In chapter V we have shown the interaction of the gemini/DOPE/DNA system on the model endosomal membrane (DPPC/cholesterol=75/25%). While mixing the DPPC and cholesterol, it forms a homogeneous film with the solid phase observed at the natural cell membrane surface pressure range (30-35 mN/m) at pH 4. The mixed 16-7-16 and 16-7NH-16 based system fluidized the model membrane at pH 4. The fluidization effect was strongly pH dependent for the 16-7NH-16 based system. This system undergoes protonation, and forms strong complex with the DOPE/DNA with a net positive charge, consequently adsorbing and penetrating into the model membrane. PM-IRRAS study revealed that the 16-7NH-16 based system was better than 16-7-16 in terms of enhanced membrane fluidization. This study suggests the idea that the gemini/DOPE/DNA based system may interact with the endosomal membrane, disrupt the membrane and release the DNA into the cytoplasm at low pH.