A Show of One's Own: The History of Television and the Single Girl in America from 1960 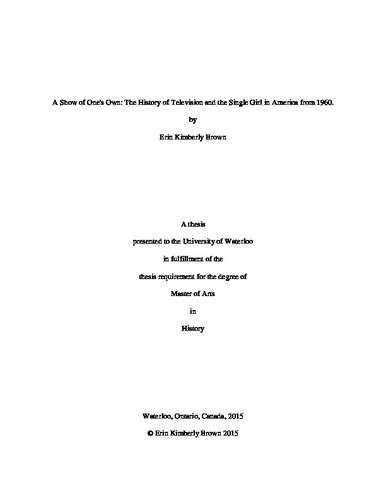 This thesis analyzes the image of the single girl in American history from 1960. The changes made to her lifestyle through technology, politics, education and the workforce are discussed, as is the impact made by the second-wave feminist movement. The evolution seen is traced in detail through five pivotal television series (That Girl, The Mary Tyler Moore Show, Murphy Brown, Ally McBeal and Sex and the City) that displayed to millions of viewers across the nation how unmarried women were building their lives and the challenges that they experienced. These programs were an important part of their female audience's life, highlighting what was possible to achieve, yet they were not always greeted with the highest regard. Judgment of the single women's lifestyle was seen from writers and politicians who commented on their unmarried status, their sexuality and pregnancies outside of marriage. Even television networks and producers would, at times, be unconvinced of the single female's choices. It was through the voices of female writers and producers that authenticity was brought out in the storylines and greater depth in characters created, displaying a necessity for diversity in media that is still required today.