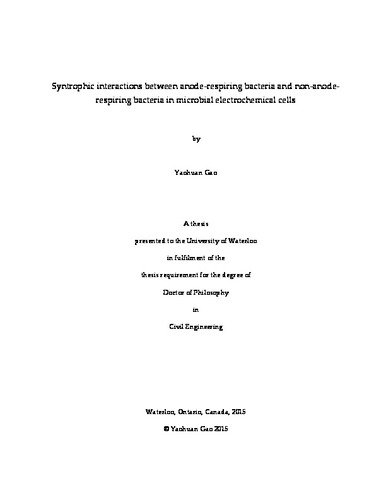 Microbial electrochemical cells (MECs), a promising technology for recovering value-added products from waste biomass and wastewater, require syntrophic interactions between anode-respiring bacteria (ARB) and non-ARB for high performance and versatile functionality. However, understanding of the syntrophic interactions is limited. Controlling the growth of unfavorable non-ARB, such as methanogens, is challenging, and the proliferation of these microorganisms seriously decreases energy recovery from MECs. Small-sized microbial fuel cells (MFCs), one kind of the MECs, have recently gained attention as renewable and portable power suppliers to small electronics. In spite of this potential, the serious deterioration of ARB’s catabolism in the absence of exogenous substrate limits the real-world application of small-sized MFCs. Additionally, MECs can be useful biosensors for various targets (e.g., volatile fatty acids, protons, and heavy metals), but the potential of sensing dissolved methane by anode biofilm has never been reported although methanogenesis and dissolved methane have been frequently observed in MECs. Therefore, the objective of this study was to explore the potentials of three new syntrophic interactions that can catalyze the applications of MECs to be (1) a sustainable anaerobic wastewater treatment technique, (2) portable power sources, and (3) biosensors for methane or methanogenesis detection. High current density of 10.0–14.6 A/m2 and high chemical oxygen demand (COD) removal up to 96% were obtained in an MEC fed with digestate at hydraulic retention time (HRT) of 4 day and 8 day. Volatile fatty acids (VFAs) became undetectable in the MEC effluent (HRT 8 day), except for low levels of acetate (4.16 ± 1.86 mg COD/l). Accumulated methane only accounted for 3.42% of removed COD. Pyrosequencing analyses showed abundant fermenters (Kosmotoga species) and homoacetogens (Treponema species) in anolytes. In the anode biofilm, propionate fermenters (Kosmotoga species and Syntrophobacter species), homoacetogens (Treponema species), and ARB (Geobacter species and Dysgonomonas species) were dominant. These results implied that syntrophic interactions among fermenters, homoacetogens, and ARB would enable MECs to maintain high current density and coulombic efficiency despite the presence of methanogens. Steady current density around 1.5 A/m2 in a dual-chamber MEC was sustained for over four days without exogenous electron donors. High efficiency, close to 100%, of electron recovery can be achieved once acetate was provided. The air-cathode MFC inoculated by this MEC showed stable anode-respiring activity over a seven-day starvation period. Nile red staining revealed that lipid-accumulating bacteria were abundant in the anode biofilm. Taken together, these results suggested that lipid-accumulating bacteria in syntrophy with ARB generated current without exogenous electron donors. This study implied that small-sized MFCs can be used as portable power sources in a discontinuous feeding manner. A long term of enrichment and growth of anode biofilm in MECs with dissolved methane, ~800 days, resulted in a syntrophy between Methanobacterium species and Geobacter species, which is the first anode-respiration-dependent anaerobic oxidation of methane (AOM) discovered so far. In this proposed syntrophy, Methanobacterium species anaerobically oxidize methane molecules and transfer electrons or certain reducing powers derived from methane to Geobacter species for anode respiration. No common electron mediators found in MECs were detected; instead, ethanol- or dimethyl ether-like compounds were detected. Electric current (2-12 mA/m2) was consistently produced from an MEC using methane as the sole carbon and electron source for over 440 days, whereas nitrogen gas sparging of the anolyte decreased the current to near zero. Deoxyribonucleic acid (DNA)-stable isotope probing (SIP) experiments employing 13CH4 combined with denaturing gradient gel electrophoresis (DGGE) demonstrated that the labeled carbon was found in DNA of dominant bacteria (Geobacter) and archaea (Methanobacterium). Fluorescence in situ hybridization (FISH) targeting the two genera clearly showed that Methanobacterium and Geobacter formed biofilm together on the surface of anode fibers. These results and the available information from literature support the explanation that AOM archaea and ARB built syntrophy for generating current from dissolved methane under anaerobic conditions.