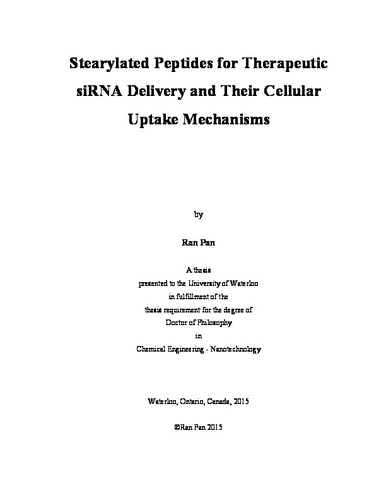 Small interfering RNA (siRNA) shows great potential as a powerful tool in gene therapy, due to its ability to regulate gene expression in a highly selective manner. siRNA is a double-stranded RNA consisting of 21–23 nucleotides and has the ability to trigger RNA interference (RNAi). RNA interference is the post-transcriptional gene silencing process where siRNA molecules bind to the complementary sequence in the target messenger RNA (mRNA), thereby inhibiting the expression of the target protein in cells. However, the clinical applications of siRNA are limited by the nature of naked siRNA molecules: Relatively large molecular weight, anionic nature and poor stability in physiological fluids of siRNA decrease its ability to permeate plasma membranes and result in inefficient cellular uptake. Thus, the development of efficient and safe delivery systems for siRNA has been an important research focus. Several strategies have been developed to aid in siRNA delivery, and peptide-based siRNA delivery reagents have been recognized as a promising approach for both in vitro and in vivo applications for more than a decade. The present study focuses on the design, modification and evaluation of novel co-assembling, cell-penetrating peptides for siRNA delivery, including the following aspects: (1) design of new peptide sequences with incorporation of stearic acid, and modification of existing peptide sequences; (2) studying and improving serum stability without compromising gene-silencing efficacy; (3) investigation of the knockdown efficiency and toxicity of the resulting peptide/siRNA complexes in cultured cells and an animal model; (4) evaluation of biocompatibility of the peptide/siRNA complexes in vitro; (5) studying of the internalization pathway, intracellular trafficking, and uptake mechanisms of the peptide/siRNA complexes. We previously reported a library of cell-penetrating, amino acid-pairing peptides that facilitate effective siRNA delivery to mammalian cells without causing cytotoxicity, but they are unstable in serum-containing media. Here, we investigated the possibility of conjugating the peptide with diethylene glycol to improve its serum stability without compromising its gene-regulation capability. One of the most promising peptides in our library, C6M1 (with sequence: RLWRLLWRLWRRLWRLLR), was conjugated with diethylene glycol. The incorporated/co-assembled siRNA complexes increased in stability in serum from less than 24 hours to up to 72 hours, with highly efficient cellular uptake and more than 90% cell viability profile. The gene-silencing ability of diethylene glycol conjugated-peptide/siRNA complexes was comparable to that of non-conjugated peptide/siRNA at both mRNA and protein levels. Despite the improved serum stability, the silencing efficiency of siRNA delivered by C6M1 and the modified DM1 (degylated C6M1) ranged from 40% to 60%, and the less efficient knockdown ability might be due to the entrapment of siRNA in endosome/lysosome vesicles. Therefore, designing new sequences to enhance the endosomal escape of the complexes was required. A series of co-assembling, cell-penetrating peptides was designed, which comprised a variant of a nuclear localization sequence, i.e. PKPKRKV, 0-6 histidine residues and an optional stearic acid group. Among these candidates, the peptide STR-HK, with sequence of STR-HHHPKPKRKV, exhibited good characteristics as a safe and efficient siRNA delivery vector, facilitating efficient siRNA delivery to mammalian cells with only a 15%-20% decrease in its cell viability. Moreover, the intratumoral injection of the STR-HK/siRNA complexes achieved high anti-tumor activity in mice, with an inhibition rate of 62.8%. Our data revealed that introducing stearic acid into the peptide sequence improved its transfection ability, and the addition of histidine residues enhanced its endosome escape efficiency. However, the previously designed peptide STR-HK and the STR-HK/siRNA complexes induced strong cytotoxicity in vitro with increasing amounts of peptide, i.e., the cell viability of STR-HK/siRNA complexes dropped to 50% when the peptide concentration increased to 4 µM. To decrease the toxicity of the delivery cargos, and further improve the gene-silencing efficiency, we designed a new series of cell-penetrating, co-assembling peptides, with the incorporation of stearic acid and a selected number of lysine, histidine and valine residues. The number of lysine, histidine and valine amino acids was carefully examined with respect to its binding affinity with siRNA molecules, and its gene-silencing efficacy induced by the corresponding peptide/siRNA complexes on a range of cell lines. Within the newly designed peptide family, the most pronounced gene silencing could be achieved with the peptide STR-H3K3V6, sequence STR-HHHKKKVVVVVV. The cell viability was further improved compared to the peptide STR-HK. In addition, to address possible immune responses, the biocompatibility of the peptide STR-H3K3V6 was evaluated in terms of complement activation and cytokine activation, and no obvious responses were observed in vitro. Understanding the uptake mechanisms of our peptide-based siRNA delivery systems will facilitate the development of safe and efficient gene delivery vectors. Thus, the internalization process and intracellular trafficking of the STR-KV/siRNA complexes was explored. Heparin treatments revealed that the electrostatic interaction of our complexes with heparan sulphate proteoglycans (HSPGs) at the cell surface was required to trigger the uptake process. Using physical and chemical endocytic inhibitors, it was found that the STR-KV/siRNA complexes mainly enter cells through an energy-independent mechanism, most likely involving direct translocation. The intracellular trafficking and internalization kinetics experiments further confirmed our complexes were uptaken through a non-endocytic pathway.