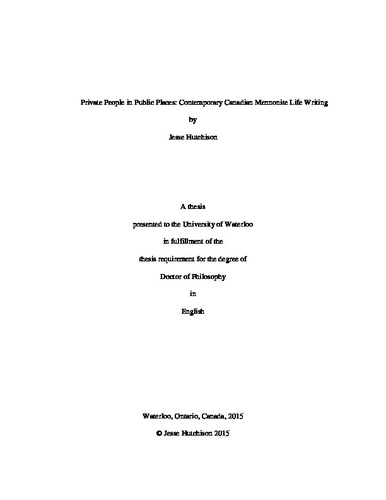 This study examines the autobiographical writing of five contemporary Canadian Mennonite authors in order show how these texts, when read collectively, work to disrupt conventional ways of thinking about life writing. Life writing scholars typically see constructed autobiographical selves as falling into one of two categories: individualistic or relational. In the case of the former, authors construct autonomous and exceptional identities that typically stand outside and above their society; in the latter case, autobiographical identities are constructed in relation to and are influenced by a significant other person or persons. Initial theories by life writing scholars such as Mary G. Mason and Susan Stanford Friedman divided these categories along gender lines, suggesting that men typically constructed themselves as autonomous individuals while women’s autobiography became a space for relational identities. By the late 1990s, though, critics such as Paul John Eakin and Nancy K. Miller collapsed this binary opposition with Eakin observing that “all identity is relational” (How Our Lives 43). I suggest that while the claims made by Eakin and Miller were crucial, subsequent critics have perhaps too broadly applied the term relationality (or what Eakin termed the “relational paradigm”) to what I consider to be a variety of extraordinarily different sorts of textual lives. The examples of contemporary Canadian Mennonite life writing I examine, for example, contain identities that are shown not so much in a mutual dynamic with another (as relational identities are understood to be) but are, instead, frequently de-privileged in the name of other people and other stories. In these cases, I look at how dominating narratives of history as well as dominating conceptions of family and community have affected the way in which these five authors make use of the discourse of autobiography. While such texts would conventionally fall within the category of relational writing, I argue that they instead illustrate the problems of using the same terminology to describe vastly different forms of self-representation. Ultimately, I suggest that these texts work nicely together in order to showcase the validity of interrogating the relational paradigm in life writing theory.