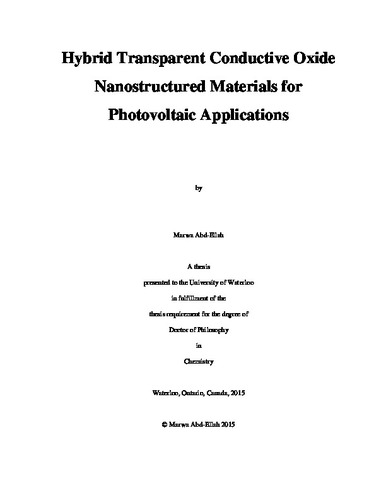 In Ontario, there are great incentives to invest in solar cell research through the Feed-In Tariff program, which has successfully increased the total connected capacity of solar power in Ontario to well over 215 MW. Extensive studies have been conducted on fabrication of efficient solar cells, with the most mature technology being silicon-based solar cells. However, other types of solar cells have been introduced as alternatives to silicon based solar cells due to their laborious work, energy consumption, and high cost of production. Different inorganic and organic photovoltaic systems including dye-sensitized, organic/polymer, quantum-dot, and hybrid nanocrystal/polymer hetero-junctions solar cells have been proposed to provide comparable efficiencies. Transparent conductive oxides are usually the main component in any solar system because of its role as an electrode photoanode, acting as a diffusion barrier and an open-circuit voltage attenuator. These are due to their high electrical conductivity, wide optical transmittance, and relatively ease of synthesis. As a result, a rich amount of studies on their synthesis, modification, and application as photo-catalytic electrodes, gas sensors, photonic crystals, and solar cell photoanodes exists in the literature. Their use in photovoltaics as thin film materials has since evolved into nanostructured films, as numerous studies have showed that the material morphology is an important parameter in improving solar cell performance. Many nanostructured transparent conductive oxide films have been extensively investigated for use as an n-type semiconductor in a p-n junction solar cell system or as a photoanode in a dye-sensitized solar cell (DSSC). Thus far these applications have proven challenging in terms of achieving high device efficiencies, particularly by taking advantage of their inherently higher surface area-to-volume ratio, better photon harvesting, and enhanced interparticle charge transport with shorter diffusion lengths across the device structure. With a large direct band gap (3.37 eV), a large exciton binding energy (60 m eV), and high electron mobility (120 cm2 V-1 s-1), zinc oxide (ZnO) is considered an excellent candidate as an (n-type) transparent semiconducting material at room temperature for photovoltaic application. In the present work, two different ZnO nanostructural morphologies are prepared by controlling the electrolyte conductivity using a direct, catalyst- and seed-layer free electrodeposition method. The effect of deposition time and temperature on the growth of the high-specific-surface-area ZnO nanotubes electrodeposited is studied. Furthermore, the morphology, crystallinity, and chemical composition of the resulting ZnO nanotubes and nanorods are fully characterized with a proposed model of their growth mechanism. These one-dimensional ZnO nanostructures are then employed as an n-type semiconductor, along with a p-type Cu2O thin film, to fabricate an inorganic p-n junction solar cell. As an important step to improve device performance, the electrical and optical properties of the p-type Cu2O film are optimized by simple annealing. Two different device structures, consisting of the electrodeposited ZnO nanorods and nanotubes grown on the top of a thick n-type ZnO seed layer (500 nm) covered by an optimized (2.5µm) p-type Cu2O layer (in order to provide the full built-in potential across the junction area), are fabricated. The relations of structural morphology (i.e. nanotube vs nanorod) and characteristic solar cell parameters are investigated. The new device architecture is found to offer minimum leakage path and reduced recombination loss expected in a typical nanostructure-based solar cell. A photon-to-electron conversion efficiency (PCE) of 0.8 % is obtained for ZnO nanotubes compared to other traditional one-dimensional nanostructures (i.e. nanorods or nanowires) that is due to the increased junction area and the better charge collection. These results illustrate the advantage of single-step electrodeposition of ZnO nanotubes, which provide a larger interfacial area and a much lower defect density than previously reported nanotubes obtained by etching ZnO nanorods. Taking advantage of their higher electron dynamics than the classical TiO2, ZnO and SnO2 are employed as photoanode materials to fabricate an organic DSSC system. To further improve the optical absorption, the effects of surface modification using gold nanoparticles to ZnO nanotubes are investigated. Different gold electrolyte concentrations are used to manipulate the plasmonic nanoparticle size while deposition time is used to control the aerial density. These studies lead to a significant increase in the PCE for DSSC based on ZnO nanotubes with gold nanoparticle modification (6%) when compared to that with pristine ZnO nanotubes (4.7%). Surface decoration with plasmonic gold nanoparticles therefore provides an efficient approach to creating not only high surface area for superior loading of dye molecules but also enhanced absorption specifically in the visible range by taking advantage of their surface plasmon resonance effect. Hierarchical one-dimensional SnO2 nanostructures are also employed as photoanode material for DSSC application. With a band gap of 3.8 eV, low UV degradation characteristic and generally high thermal and chemical stability, SnO2 is also an excellent photoanode alternative to TiO2. Almost 10-fold enhancement of PCE (3.6%) when compared with pristine SnO2 nanobelts with (0.48%) is obtained for these hierarchical SnO2 nanostructures. This significant improvement is in part due to better dye loading of highly branched nanostructures. Additional surface passivation has also been performed on the as-deposited hierarchical SnO2 nanostructures by dip-coating with an MgO passivation layer of appropriately optimized thickness. Such an insulating layer is found to effectively reduce the recombination loss process caused by the higher electron mobility of SnO2 photoanode nanostructures. This MgO-passivation treatment further enhances the PCE to (4.14%). The present work therefore shows that one-dimensional ZnO and SnO2 nanostructures provide a viable, powerful platform for developing the next-generation photovoltaic devices. This study further demonstrates the novel techniques used to significantly enhance the PCEs for both inorganic p-n junction solar cell and organic DSSC.