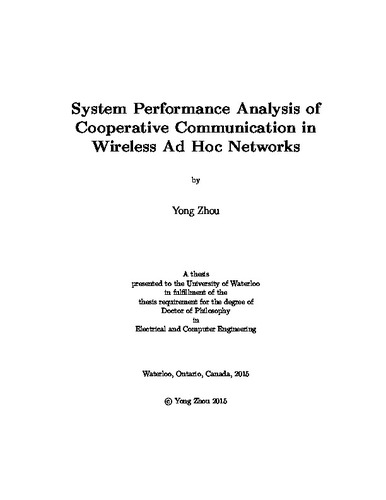 Wireless ad hoc networks have been attracting more and more attentions in recent years from both academia and industry, because of their low deployment costs and broad applications. Due to the scarcity of the radio spectrum, supporting concurrent transmissions by exploiting the spatial frequency reuse gain is necessary to enhance spectrum utilization. On the other hand, cooperative communication is a practical technique for realizing the spatial diversity gain to mitigate the detrimental effect of wireless channel and enhance the transmission reliability. Enabling concurrent cooperative transmissions across a network can achieve both types of gains. Due to the broadcast nature of wireless communications, the concurrent cooperative transmissions using the same radio channel generate interference to each other, which is the main performance-limiting factor. Accurate characterization of interference is a fundamental step towards evaluating the performance of cooperative communication in a wireless ad hoc network. However, the distributed network operation, random node locations, interference redistribution due to relay transmissions, and dynamic traffic arrival pose significant challenges in interference characterization. Under the protocol interference model, this thesis evaluates the effectiveness of cooperative communication in a wireless ad hoc network from a perspective of overall network performance through investigating the network throughput, which captures the tradeoff between single-link cooperation gain and network-wide reduced spatial frequency reuse due to relay transmissions. In particular, based on stochastic geometry, the outage probabilities of direct and cooperative transmissions are derived to characterize single-link cooperation gain. On the other hand, according to a randomized scheduling scheme, the expected numbers of concurrent direct and cooperative transmissions that can be accommodated within the network coverage area are calculated to characterize network-wide reduced spatial frequency reuse. The analytical results show that a locally beneficial cooperation decision is not guaranteed to be network-wide beneficial. The number of potential relays determines the achievable performance of a cooperative link, and varies for different source-destination pairs due to random relay locations. This thesis proposes an opportunistic cooperation strategy based on the number of potential relays available for each source-destination pair. Under the physical interference model, the correlation of node locations induces the correlation of interference power. Via modeling node locations as a Poisson point process (PPP) and based on the Campbell's theorem, the temporal correlation coefficient of interference power at a destination node is analyzed. In addition, we derive the outage probability of opportunistic cooperation while taking into account the spatial and temporal interference correlation. The overall network performance can be enhanced by adjusting the proportion of concurrent cooperative transmissions. In addition to random node locations and interference redistribution, dynamic traffic arrival further complicates the interference characterization. This thesis investigates the performance of cooperative communication in a wireless ad hoc network with unsaturated traffic, which introduces a correlation between the interferer density and packet retransmission probability. Based on queueing theory and stochastic geometry, the interference power is characterized from two aspects, namely stationary interferer density and interference correlation in two consecutive time-slots, to evaluate the network performance. The analytical results show that the performance analysis under the assumption of independent interference power overestimates the network performance. The proposed theoretical performance analysis framework provides a step towards better understanding of the benefits and limitations of cooperative communication in wireless ad hoc networks with spatially random nodes, and in turn provides useful insights on protocol design and parameter setting for large-scale networks.