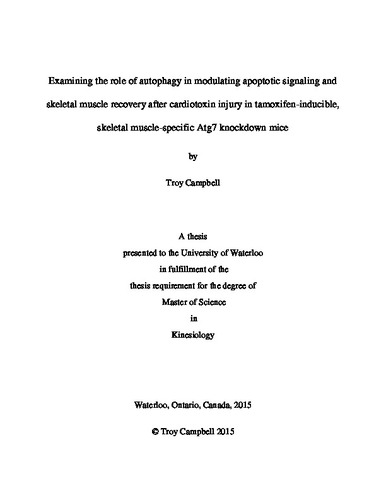 Skeletal muscle is a unique tissue composed of multinucleated, post-mitotic fibers. Despite its post-mitotic nature, skeletal muscle has an astounding ability to regenerate after injury largely thanks to muscle-specific stem cells known as satellite cells. Skeletal muscle also constantly balances rates of protein synthesis and breakdown in order to maintain its viability. One of the major systems involved in muscle protein degradation is autophagy. During autophagy, long-lived and damaged cellular components are sequestered in double membrane bound vesicles known as autophagosomes and are subsequently degraded by lysosomes. The E1-like enzyme known as ATG7 (autophagy-related protein 7) is critical to this process as it plays a key role in autophagosome formation. Autophagy has important metabolic functions, but it also plays a major role in cell quality control in order to reduce cell stress and a form of cell death known as apoptosis. Apoptosis can be induced by a number of internal and/or external signals, and leads to the cleavage of a variety of different proteins within the cell. Many points of interaction exist between apoptosis and autophagy which has led to increased examination of the interplay between the two processes. Conclusions from these studies have caused a divergence in opinion regarding the protective or toxic role of autophagy in times of stress in various tissues, including skeletal muscle. Consequently, the aim of the current thesis was to investigate the role of autophagy in modulating apoptotic signaling and skeletal muscle recovery in response to cardiotoxin-induced muscle damage. To do this, tamoxifen-inducible, skeletal muscle-specific Atg7 knockdown mice (i.e. F/FCre mice) generated using Cre-lox technology were compared to control mice (i.e. F/F mice) prior to and 3, 7, and 14 days after cardiotoxin-induced skeletal muscle injury. This model was shown to be quite effective in knocking down the Atg7 gene, as ATG7 protein was reduced by ~61% in the F/FCre mice relative to the F/F control mice prior to cardiotoxin exposure. Unexpectedly, a restoration of ATG7 expression was observed in the F/FCre mice by day 3 post-injury. It is speculated that this return of ATG7 protein was caused by the recruitment of satellite cells to the muscle fibers in response to damage, as the induction of Atg7 knockdown likely did not occur in these cells. It is also possible that Cre-mediated recombination of Atg7 did not occur in all of the myonuclei, and in turn, Atg7+/+ myonuclei could have upregulated ATG7 production after cardiotoxin exposure. Although the restoration of ATG7 in the F/FCre mice prevented the current study from examining changes in apoptotic signaling and muscle recovery in response to autophagy inhibition, it was still possible to examine the relationship between autophagy and apoptosis in response to acute muscle damage. Autophagic signaling appeared to peak on day 3 post-cardiotoxin injury and then began to decrease over time. In contrast, apoptotic signaling was only slightly elevated on day 3, and did not peak until day 7 when autophagic activity was decreasing. These findings, in combination with reduced cytochrome c, MnSOD, and CuZnSOD on day 3, as well as reduced tBid expression on day 3 and 7, may suggest that autophagy plays a cytoprotective role after muscle damage by suppressing cell stress and apoptotic signaling. Additionally, the results of the current study suggest that basal autophagy inhibition could potentially alter fiber type distribution and cause reductions in muscle mass, while a subsequent restoration of autophagy could return muscle fiber type composition and muscle mass to control levels. Overall, this thesis was able to further elucidate the temporal relationship between autophagic and apoptotic signaling after acute muscle injury, and was able to evaluate the effects of basal autophagy inhibition on muscle mass and muscle fiber type distribution. Valuable methodological information for future studies planning to use inducible, skeletal muscle-specific gene knockout models in conditions of extensive muscle damage can also be drawn from the results of this thesis.