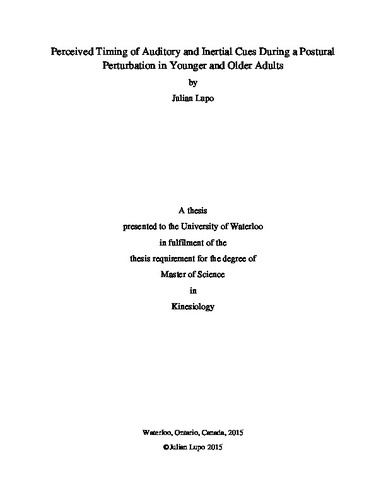 How the perceived timing of sensory events changes during a fall is relatively unknown. Common anecdotal reports suggest that people often report distortions in their perception of time with very little recollection of what occurred during the fall. Previous research has found that the vestibular system is perceptually slow compared to the other senses (45-160ms delay), indicating that vestibular stimuli must occur prior to other sensory stimuli in order for it to be perceived as synchronous. The purpose of Study 1 examined links between falling and delays in inertial perception. In study 1, young healthy adults were recruited to establish whether temporally unpredictable postural perturbations are perceptually delayed relative to an auditory stimulus. In study 2, a second group of young healthy adults and a group of older adults are compared. Motion capture was used in study 2 to determine whether the perceived timing of a fall relative to a sound is related to behavioural reflexes generated in response to falling. Participants made temporal order judgments (TOJ) identifying whether the onset of their fall or sound came first to measure the point of subjective simultaneity (PSS) between sensory cues, with certainty measured by the just noticeable difference (JND). Study 1 results show that the onset of a perturbation has to precede an auditory stimulus by ~44 ms to appear coincident with the fall. Results from younger adults in Study 2 closely replicated those from Study 1, where a fall has to precede an auditory stimulus by ~44ms in order for the stimulus pair to be perceived as simultaneous. The results also clearly demonstrate that older adults require a fall to occur even earlier before an auditory stimulus than was required for younger adults (~88ms). The only significant relationship between perceptual responses and behavioural reflexes was a positive correlation between stride length and JND for younger adults. The additional lead times for detecting perturbation onset that are found in older adults may help explain the increased likelihood for fall incidence in older adult populations.

Julian Lupo (2015). Perceived Timing of Auditory and Inertial Cues During a Postural Perturbation In Younger and Older Adults. UWSpace. http://hdl.handle.net/10012/9803