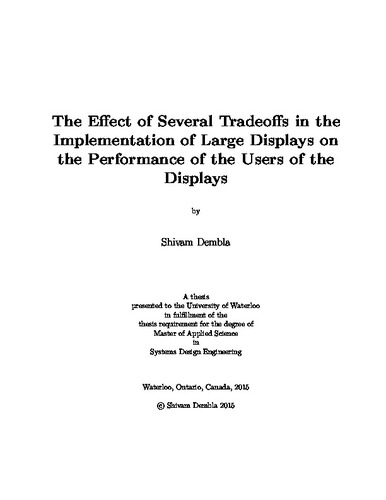 A large display can be constructed in two different ways: 1. a rectangular grid, or tiling, of many small screens with seams, or bezels, at the boundaries between the screens and 2. one large screen with no bezel inside the screen. The first way costs significantly less than the second way. However, the first way creates a discontinuity in the image because of the bezels, and this discontinuity may impact a user's performance. There are two different ways to implement the first, tiling way of constructing a large display: 1. tiled, multiple projections onto one large screen and 2. tiling of actual LC displays. With the first way, bezels are avoidable, but there is the necessity of continuous, precise coordination of multiple projectors. With the second way, once the displays are mounted, no coordination is necessary, but bezels are unavoidable. While it might seem preferable to avoid bezels and incur higher construction or coordination costs, the reality is that if no user's performance is negatively affected by bezels, then there is no reason not to use the cheaper methods of constructing large displays. Therefore, the aim of this study is to determine how bezels affect a user's task performance. We conducted two controlled experiments in order to determine - how varying the width of bezels affects a user's performance; - how varying the number of bezels affects a user's performance; and - how the choice between tiled, multiple projections and tiling of actual LC displays affects a user's performance. In each experiment, the participants solved a puzzle within a given time. The findings from this study are that user performance is not affected by variation in the width of bezels and by variation in the number of bezels. However, the tiling of actual LC displays is better for user performance than tiled, multiple projections. Therefore, it is more acceptable to use a rectangular grid of actual LC displays to implement a large display.

Shivam Dembla (2015). The Effect of Several Tradeoffs in the Implementation of Large Displays on the Performance of the Users of the Displays. UWSpace. http://hdl.handle.net/10012/9802