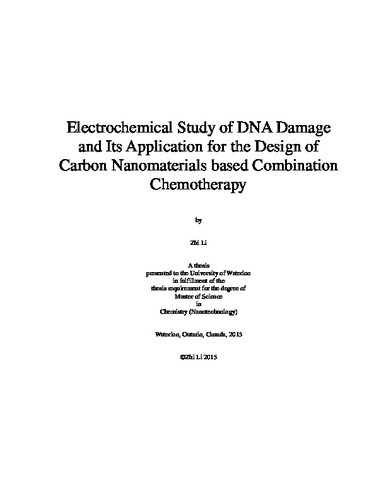 Cis-diamminedichloroplatinum (II) (cisplatin or CDDP) is the first platinum based chemotherapy drug used for treating various types of cancers. It is discovered that the combination of cisplatin with electron donors can enhance the efficacy of the therapy, due to a unique electron transfer mechanism. Deoxyribonucleic acid (DNA) damage is a main step of the mechanism of this anticancer drug, which can be effectively detected by electrochemical methods. Carbon nanomaterials (CNMs) are electron-rich materials with abundant π electrons in their structure. With suitable functionalization, CNMs can become biocompatible and act as suitable electron donors to boost the cisplatin efficiency. Here, we designed two electrochemical methods to detect DNA damage respectively using the redox signal of DNA bases, and an indicator species along with a single-stranded DNA modified gold electrode (ssDNA-AuE). In the first method, the oxidation signal of Deoxyguanosine monophosphate (dGMP) was characterized and chosen as an indicator for the study of DNA base damage. Decreased dGMP oxidation signal was observed after the dGMP was treated by cisplatin, which suggested the binding of cisplatin on guanine (G) base. However, when dGMP was treated by cisplatin in combination with N,N,N',N'-Tetramethyl-p-phenylenediamine (TMPD), no enhanced effect was observed probably due to the autoionization of TMPD in aqueous solutions. In the second method, the ssDNA-AuE was prepared through gold (Au)-thiol chemistry, and characterized using a redox pair, ferricyanide/ferrocyanide ([Fe(CN)6]3−/[Fe(CN)6]4-). Lower current response of [Fe(CN)6]3−/[Fe(CN)6]4- was observed at the ssDNA-AuE compared with the bare Au electrode, due to the repulsive force between this redox pair and the DNA strands on the electrode surface. After the ssDNA-AuE was treated by either cisplatin alone or cisplatin in combination with TMPD, the redox signal of [Fe(CN)6]3−/[Fe(CN)6]4−¬¬¬ increased at the treated ssDNA-AuE, indicating the interaction between DNA strand and cisplatin. We also discovered that both cisplatin binding and DNA strands break contributed to the recovered [Fe(CN)6]3−/[Fe(CN)6]4− signal using elementary analysis. In addition, stronger [Fe(CN)6]3−/[Fe(CN)6]4− signal was recovered on the ssDNA-AuE treated by the combination of cisplatin and TMPD than that treated by cisplatin only, showing that this method is sensitive enough to detect the enhanced effect caused by electron donors. After the establishment of the detection methods, they was applied to monitor the combination effect of cisplatin and CNMs. Briefly, reduced graphene oxide (rGO) was synthesized through the modified Hummer’s method followed by hydrazine reduction. After grafting Polyethylene glycol (PEG) on the rGO structure, the effect of PEG-rGO on the interaction of cisplatin and DNA was studied using the two designed electrochemical methods in this project and Clonogenic assay. However, all results show that the PEG-rGO has no noticeable effect on improving cisplatin efficiency. Therefore future work is needed to design an effective graphene based electron donor. Our work suggests that the electrochemical method is a powerful tool for studying DNA damage, and can be applied to study the cisplatin and DNA interaction.

Li Zhi (2015). Electrochemical Study of DNA Damage and Its Application for the Design of Carbon Nanomaterials based Combination Chemotherapy. UWSpace. http://hdl.handle.net/10012/9800