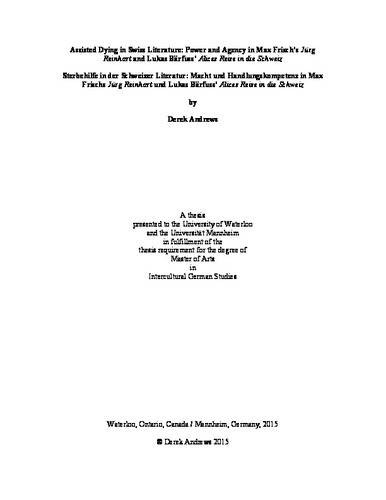 The following thesis deals with the representation of themes of assisted dying in Max Frisch’s 1933/34 novel Jürg Reinhart and Lukas Bärfuss’ 2005 play Alices Reise in die Schweiz (Alice’s Trip to Switzerland), and discusses these representations in the context of institutional power and personal agency. I argue that the prewar representation of assisted dying has changed significantly this period, in that the institutional powers at work have shifted and that portrayals of characters’ agencies have become more compelling, seeing an overall increase in narrative importance. Utilizing a post-structural theoretical framework, based primarily on work by Michel Foucault and Judith Butler, I examine the texts in terms of their presentations of assisted dying by considering the discursive frameworks within which those representations find themselves. I do this by first examining the different institutional influences at work in the texts, such as the juridical and the medical, in order to determine the extent and nature of this influence, as it pertains to questions of assisted dying. Then, owing to the importance of humanist discourses of self-determination to the assisted dying debate, I examine the role and extent of agency as portrayed in the texts, within the context of the aforementioned discursive influences. Through this analysis, this thesis seeks to address the role of literature in the assisted dying debate by examining the various representations of discursive influence, and resistance against it, within the texts, in a bid to reach further understandings of how these institutions, such as the medical institution, work in reference to assisted dying. In chapter two, I provide an introduction to the research context within which these texts exist, examining secondary scholarship on the works and addressing the social context that grounds discussions of assisted dying. In the next chapter, I place this thesis in its theoretical context, establishing a methodological approach for the examination of power and agency in the texts. Then, in the two chapters that form the bulk of my analysis, I approach the works in turn, each time considering the institutional powers at work in the text, before moving to an examination of the portrayals of agency. I conclude that my chosen texts suggest that the discourses around assisted dying have changed, with the influence of religious discourse giving way, at least partially, to a more general public discourse, while the regulating effects of the juridical and medical spheres remain constant. Additionally, the role of agency in conversations around assisted dying, as reflected in the texts, seems to have become more important, as evidenced by the differences in representation between the works. These findings show that, owing to the discursive relationship between literature and public discourse, similar developments have occurred outside of the literary sphere.