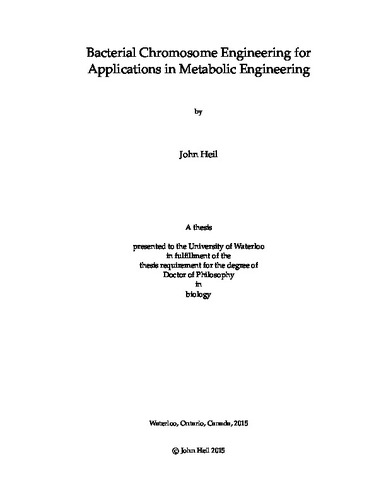 As genetic engineering technologies continue to advance and metabolic engineering projects become more ambitious, the need for chromosome engineering tools is increased. In this thesis, I have described the development of a ΦC31 phage integrase based cassette exchange system. This system is called integrase mediated cassette exchange (IMCE). IMCE allows for the integration of a ΦC31 attB flanked DNA cassette, carried on a mobilizable donor vector, into a chromosomal landing pad locus. The landing pad locus, consisting of ΦC31 attP sites flanking marker genes, was integrated into the chromosome of three members of the Rhizobiales, by homologous recombination to create landing pad strains (LP-strains). The integration of the donor cassette is catalyzed by ΦC31 integrase, expressed from a mobilizable vector. To accomplish IMCE, a tetraparental conjugative mating is carried out, including the attB donor vector strain, the ΦC31 integrase expression plasmid strain, the LP-strain, and the mobilizer strain. A variation on IMCE , reverse IMCE, was also accomplished with the addition of a recombination directionality factor gene to the integrase expression plasmid, and the use of attL and attR sites. Reverse IMCE was used to create a new LP-strain containing the counter-selectable marker gene sacB. A strategy to assemble overlapping DNA cassettes post-IMCE using genetic crosses was developed. An application of this system was to assemble synthetic operons for the metabolic engineering of Sinorhizobium meliloti to produce medium chain length (mcl) polyhydroxyalkanoates (PHA). Two homologues each of phaC (PHA synthase gene) and phaG (3-hydroxydecanoyl-[acyl-carrier-protein]:CoA transacylase gene) were chosen. The genes were successfully combined in all four possible configurations on the chromosome of S. meliloti. It was observed that the phaC construct did not integrate into the expected location, and therefore its expression was not guaranteed, but promising preliminary results showing the detection of mcl-PHA were obtained. The phaC genes described in this thesis have also been cloned into plasmids, for their expression in strains carrying phaG within the landing pad. These strains will provide valuable tools for future work concerning PHA production. The chromosome engineering tools developed in this thesis will be valuable for any future applications requiring stable maintenance of a synthetic construct on the chromosome of these Rhizobiales members.