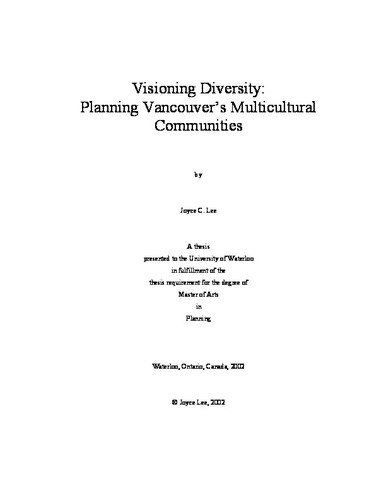 The roles and responsibilities of planners in managing culturally diverse cities are beginning to be articulated in the literature. "Visioning,"as planners have used it in recent years, has the potential to help realize "multicultural planning" because of its intentions to involve broad public participation and represent diverse interests, thereby promoting equity and facilitating democracy. This exploratory study examines how the City of Vancouver in British Columbia, Canada has involved ethnocultural groups through a visioning process. To date, four Vancouver communities containing a sizeable immigrant population have participated in preparing plans for their neighbourhood through the city's Community Visions Program. Information for this study was gathered through a critical review of planning-related documents and key informant interviews with staff and community participants (including those of visible minority background) in the Visions Program. Results from the data collection were grouped into main themes and triangulated for analysis. Results indicate that visioning, as it has been used in Vancouver, is capable of being a useful technique in carrying out multicultural planning. There is evidence that planners have learned a great deal from engaging in multicultural planning, as seen through the increased success of outreach in the latter two communities to undergo the Visions Program. This suggests that Vancouver's visioning exercise will improve simply by virtue of continued outreach. However, it is important to differentiate between the public consultation process and the resultant products in regard to policy and land use change. There appears to be more general satisfaction with the inclusive visioning process than with the end results. Empirical research suggests that if planners are serious about engaging in a multicultural planning process, they will need to guarantee some tangible results that can be seen in the community and that acknowledge and respect cultural diversity.