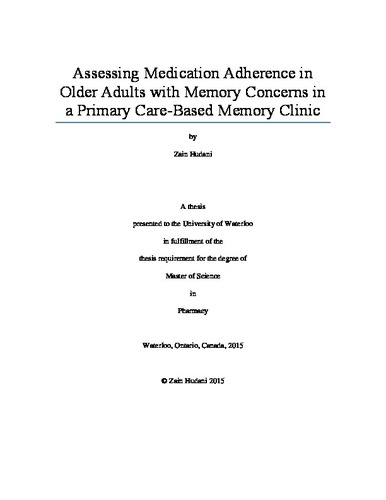 There is an increasing prevalence of cognitive impairment in the rapidly ageing population. Cognitive impairment has been shown to be a unique barrier to medication adherence in older adults coupled with an increased number of chronic conditions and prescription medications. There is a need to identify those who are non-adherent in order to reduce the repercussions related to non-adherence such as hospitalization and increased health-care costs. Although several instruments exist to assess adherence, not all can be applied to primary health based setting. Pharmacists practicing in novel primary care settings such as Center for Family Medicine’s Family Health Team’s Memory clinic measure adherence using pill count and pharmacy refill data, however, which method is more feasible remains unknown. Furthermore, it remains unknown whether the scores obtained using these instruments correlate. There is paucity in the current literature that addresses the aforementioned gaps. In addition, cognitively impaired older adults require assistance in managing medication, however, it remains unclear which adherence aids are being used by the caregivers of these patients seen at the memory clinic. Therefore, the overall objectives of this thesis were: 1) To map and describe the various aspects described in the current literature regarding medication adherence in older patients with memory concerns, and, 2) To determine the most feasible method of assessing adherence in an interdisciplinary, primary care based memory clinic setting.