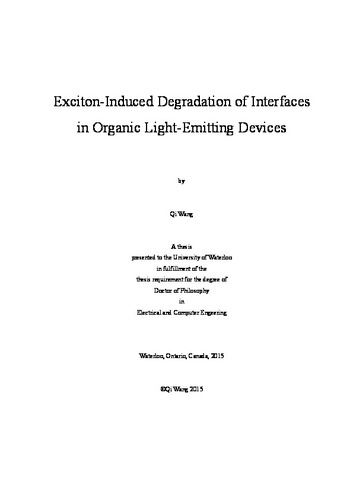 A new revolution in electronics/optoelectronics has become possible in the past two decades due to the emergence of organic semiconductors. Among all the applications based on organic semiconductors, organic light-emitting devices (OLEDs) have so far been the most promising technology. OLEDs are rapidly gaining momentum as future candidates for displays and solid-state lighting, due to their unique advantages such as thin-film architecture, low manufacturing energy and temperature requirements, mechanical flexibility and the potential for large-scale fabrication. Despite the significant progress in realizing high-efficiency OLEDs, one of the biggest technical barriers for their wider commercial presence remains the rapid device luminance degradation, especially for the blue-emitting ones. Understanding the underlying degradation mechanism is therefore a prerequisite for the realization of devices with prolonged stability. In this thesis, exciton-induced degradation of interfaces in OLEDs, including organic/electrode and organic/organic interfaces, is studied. The investigations uncover that excitons can affect and degrade device interfaces much more severely than they can affect bulk material. The results also reveal that excitons degrade both types of interfaces, resulting in a deterioration in charge conduction across them. In case of organic/electrode interfaces, the degradation is caused by the mere presence of excitons in their vicinity. Such degradation is found to be photo-chemical in nature, and is associated with a reduction in chemical bonds between metal atoms and organic molecules. Such interfacial degradation can occur during device normal operation by means of direct electron-hole (e-h) recombination near the interfaces, diffusion of excitons to the interfaces, or re-absorption of emitted photons. In case of organic/organic interfaces, on the other hand, the degradation arises from aggregation of both host and guest materials in the vicinity of the e-h recombination zone. Such aggregation process is induced by the co-existence of excitons and positive polarons on host or guest molecules. The extent of aggregation appears to correlate with the materials bandgap rather than with their glass-transition temperatures. The findings uncover a previously unknown degradation mechanism that appears to be responsible for the generally much lower stability of blue devices relative to their green and red counterparts, especially in case of phosphorescent emitters, and provide the first explanation for the generally lower stability of phosphorescent OLEDs relative to their fluorescent counterparts. The discovered phenomenon is also expected to be playing a role in the degradation of other organic optoelectronic devices such as organic photo-detectors and organic solar cells.