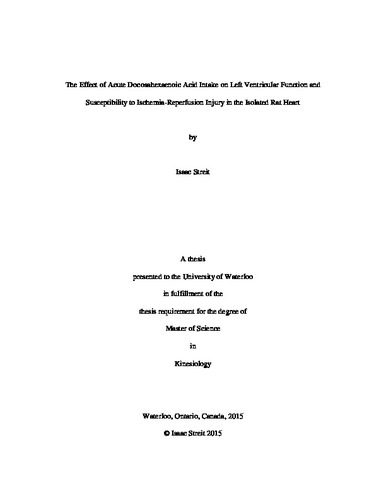 The chronic intake and myocardial incorporation of n-3 highly unsaturated fatty acids (HUFA), particularly docosahexaenoic acid (22:6n-3, DHA), is believed to protect against ischemia-reperfusion injury, possibly through oxidative stress-dependent upregulation of enzymatic antioxidants. These adaptations may occur as early as 24 hours after the initial intake, but the effect of acute (<24 hour) DHA intake on myocardial DHA accretion, susceptibility to ischemia-reperfusion injury, and content of enzymatic antioxidants has not been characterized. Additionally, recent research suggests that acute intake patterns may be the norm in human populations, and thus it is important to study the effect of this dietary pattern on cardiovascular physiology. Therefore, Sprague-Dawley and Wistar rats were exposed to a one time gavage of a high DHA oil (DHASCO, 0.4 mg DHA/g body weight) to study the effect of acute DHA intake on left ventricular function and susceptibility to ischemia-reperfusion in the Langendorff ex vivo rat isolated heart model. Left ventricular myocardial samples were collected and analysed for total fatty acids, neutral lipid composition by thin layer chromatography, lipidomics by HPLC MS-MS, and the enzymatic antioxidants MnSOD, CuZnSOD, and GPx by western blotting. A single dose of DHA affects the fatty acid profiles of both plasma and left ventricle at 24 hours. The concentration of both eicosapentaenoic acid (EPA) and DHA is increased in plasma total lipids, with a corresponding decrease in the relative percent of the n-6 HUFA arachidonic acid (ARA) and adrenic acid (p<0.05). EPA is additionally elevated in the total lipids of the left ventricle (p<0.05), with a non-significant trend towards increased DHA (p=0.053). However, left ventricular phospholipid and triacylglycerol DHA concentrations are significantly elevated 24 hours following DHA treatment (p<0.05). Lipidomic analysis demonstrated a trend towards increasing total DHA (p=0.081) and DHA in phosphatidylethanolamine (PE, p=0.078) fractions, primarily driven by increases in 16:0/DHA PE, although this did not reach statistical significance. This altered lipid profile is associated with reduced baseline left ventricular function in Sprague-Dawley male rats (p<0.05), but improved post-ischemic left ventricular functional recovery (p<0.05) and reduced infarction (p<0.05 when males and females were combined) in a constant flow isolated heart model. An effect of DHA treatment on left ventricular function was not observed in Sprague-Dawley female rats (p>0.05). DHA-fed male Wistar rats perfused with constant pressure had higher coronary flow during reperfusion (p<0.05), but DHA treatment in these animals did not reduce infarction (p>0.05), indicating that the effect of acute DHA treatment on ischemia-reperfusion injury is dependent on animal strain and the method of heart perfusion. There was no effect of acute DHA feeding on the myocardial protein content of the enzymatic antioxidants CuZnSOD, MnSOD, and GPx (p>0.05). Therefore, a single dose of DHA increases plasma and myocardial EPA and DHA content at 24 hours and affects myocardial and vascular function at 24 hours dependent on strain and sex. This effect is independent of increases in the myocardial protein content of the enzymatic antioxidants tested.