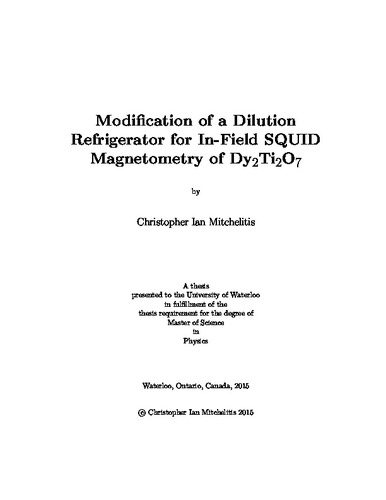 The pyrochlore oxide family is a well known class of geometrically frustrated magnets with novel properties such as residual entropy at low temperatures and monopole-like quasiparticle excitations. One member of this family, Dy2Ti2O7, is a well characterized material with both theoretical and experimental agreement for the dipolar spin ice model [38]. One consequence of this model are the ice rules, where due to local <1 1 1> Ising like anisotropy, and ferromagnetic dipolar coupling between spins in the magnetic ion sublattice, it is energetically favorable for two spins to point into the center of each tetrahedra and two to point out [19]. This simple rule is simultaneously the cause of the residual entropy, and the cause of monopole-like quasi-particle excitations. These properties of the spin ice state have been measured extensively in Dy2Ti2O7, and have been accurately quantified through a.c. susceptibility [64, 50, 35, 36, 57] and heat capacity measurements [48] from high temperature down to 1 K. Below 1 K, there is still work to be done in these materials, for example, explaining a recent heat capacity result which suggest an ordered state in Dy2Ti2O7 at low temperature [46], and the development of a consistent theory behind the Arrhenius relaxation seen in a.c. susceptibility measurements below 1 K [64]. In addition to the interesting behavior of the spin ice state in zero applied magnetic field, there exists the possibility of the Kagome ice state forming in these materials when a magnetic field is applied along the [1 1 1] crystallographic direction [54, 21]. The Kagome ice state has been reported to have many interesting properties, with many of these being measured in Dy2Ti2O7; for example, two plateaus in the magnetization along the [1 1 1] direction for different applied magnetic fields along [1 1 1] [54], and multiple heat capacity peaks at low temperatures [21]. One measurement that isn't well characterized is the a.c. susceptibility in the Kagome ice state, and so for this purpose, a dilution refrigerator was successfully modified for in-field SQUID susceptibility measurements using a Niobium SQUID gradiometer with a 8.5 T superconducting magnet. With the modifications in place, the dilution fridge reached a temperature below 10 mK, with in-field temperature control better than 1 part in 10,000 below 100 mK. A full characterization of the new setup was performed through a zero field a.c. susceptibility measurement of Dy2Ti2O7. This measurement was done between 525 mK and 1.2 K, in a bandwidth of 1 mHz to 1 kHz, and the results are compared to previously published work. Next, the magnetic field was turned on, and the fridge was found to be capable of taking SQUID susceptibility data in a 1 T field, thus achieving the ultimate goal of the design. In-field a.c. susceptibility was measured on the same Dy2Ti2O7 crystal as the zero field data between 625 mK and 1.2 K, with fields between 0.4 T and 1 T along [1 1 1], in a bandwidth of 10 mHz to 1 kHz. It was found that the zero field a.c. susceptibility data qualitatively reproduced the results of previous measurements in the Arrhenius region below ~ 1 K, with the main difference being that the barrier to relaxation was 10.9 K ± 0.3 K for this sample as opposed to the 9.79 K [64] and 9.19 K ± 0.34 K [50, 49] measured previously. The full-width-half-max of the X'' peaks were found to be between 1.4-1.7 decades in the Arrhenius region, in agreement with the previously measured 1.35-1.6 decades on a different Dy2Ti2O7 sample [64]. In addition, the dynamical correlation functions of the a.c. susceptibility data were calculated and were found to have the same stretched exponential form at short times, leading into an algebraically long time tail at longer times, as was measured in Dy2Ti2O7 previously [50]. The stretch factors of the stretched exponential region were found to be between 0.73-0.77, in agreement with the previously measured 0.7-0.8 [50]. These results showed the accuracy of the new dilution refrigerator setup in zero field, and showed that the theory which best describes the a.c. susceptibility data in the low temperature Arrhenius region is still the theory developed in [50]. It was found that the magnetic relaxation frequencies of Dy2Ti2O7 decreased in value as the magnetic field was increased along [1 1 1] for all temperatures measured. The relaxation frequencies dropped by almost a decade in frequency compared to the zero field data at the highest field measured, 1 T. Arrhenius relaxation was observed below 1 K at 400 mT, 500 mT, 600 mT, and 700 mT, with the same barrier to relaxation of approximately 10.9 K as the zero field barrier. The existence of an Arrhenius relaxation regime in the Kagome ice state can be deduced from current theoretical models, however a barrier to relaxation that is the same as the zero field barrier, and also attempt frequencies which steadily drop in value as the field increases along [1 1 1], are interesting results. The increase in the characteristic relaxation times was found to fit to an exponential as a function of applied field, suggesting a modification to the equation derived in [50] for the relaxation times in this regime in Dy2Ti2O7. Finally, a heat capacity measurement of the double peak superconducting transition of the f-wave superconductor UPt3 was performed on the new dilution refrigerator setup. This was done between 250 mK and 650 mK, in order to quantify its low temperature heat capacity capabilities. The results are shown in Appendix A. The data was found to be extremely clean, with voltage noise on the thermometer connected to the UPt3 crystal limited by the low noise preamplifier used to measure its resistance value. The double peak superconducting transition was resolved, and the main properties of the transition were found to agree with previously measured results on UPt3.