Constraining the Properties of Sagittarius A* with the Event Horizon Telescope 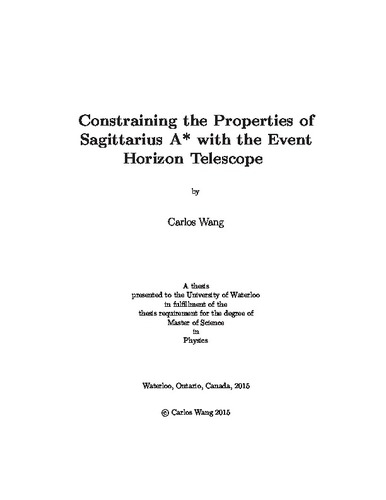 Sagittarius A* (Sgr A*) is a primary target for testing strong gravity, jet formation and black hole accretion for the the Event Horizon Telescope (EHT). Motivated by continued improvements of the observations from the EHT, including newly reported closure phase measurements, this thesis reports three research directions. Two of these constrain strong gravity parameters with the EHT. First, applying the new closure phase information from the EHT improves upon the existing quasi-Kerr metric deviation constraints from visibility magnitudes only, which is used to test the no-hair theorem. Future constraints were also simulated with the addition of new stations to the EHT, resulting in sub-percent constraints. Second, the six year (2007 to 2013) duration of EHT observations enable a search for disk misalignment and precession. Both Lense-Thirring driven and arbitrary precession models were explored. No discernible precession was found from 2007 to 2013. The search also resulted in limits on the black hole spin and accretion flow size. The third direction is the development of a new analysis pipeline, THEMIS, to replace the existing radiatively inefficient accretion flow (RIAF) analysis software used thus far to test models with EHT data.THEMIS is capable of easily integrating new observations and models of Sgr A*, as well as employing Markov chain Monte Marlo (MCMC) methods to make higher dimensional parameter space explorations feasible. All individual components have been successfully validated, and integrated, and are now ready for global testing and optimization. Following this, THEMIS is planned to be used to constrain two new RIAF parameters: the disk height ratio and sub-Keplerian parameter.

Carlos Wang (2015). Constraining the Properties of Sagittarius A* with the Event Horizon Telescope. UWSpace. http://hdl.handle.net/10012/9779