Pose Estimation and Segmentation for Rehabilitation 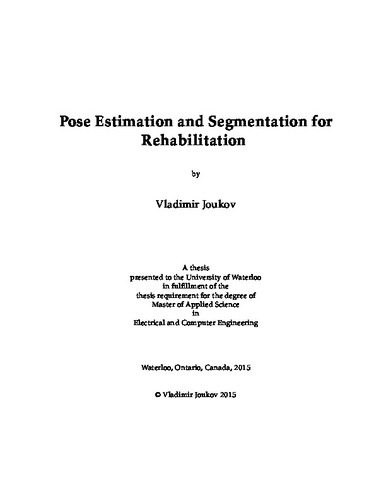 The global population is getting older and the aging demographic is increasing demands on health-care industry. This will drive the demand for post stroke, joint replacement, and chronic disease management rehabilitation. Currently physiotherapists rely on mostly subjective and observational tools for patient assessment and progress tracking. This thesis proposes methods to enable the use of non-intrusive, small, wearable, wireless sensors to estimate the pose of the lower body during rehabilitation and extract objective performance measures useful for therapists. Two different kinematic models of the human lower body are introduced. The first approach expresses the body position and orientation in the world frame using three prismatic and revolute joints, while the second switches the model's base between the right and the left ankle during gait. An Extended Kalman Filter (EKF) is set up to estimate the joint angles, velocities, and accelerations of the models using measurements from inertial measurement units. The state update model assumes constant joint acceleration and is linear. Measurement prediction, relating the joint positions, velocities and accelerations to the measured angular velocity and linear acceleration at each IMU, is done using forward kinematics, using one of the two proposed kinematic models. The approach is validated on healthy participant gait using motion capture studio data for ground truth comparison. The prismatic and revolute model achieves better Cartesian position accuracy in the swing leg due to a shorter kinematic chain, while the switching base model improves the stance leg Cartesian estimate and does not allow measurement noise to accumulate as drift in global position, knee joint angle root mean squared errors (RMSE) of 6.1 and 5.6 degrees are attained respectively by the models. Next the Rhythmic Extended Kalman Filter (R-EKF) algorithm is developed to improve pose estimation. It learns a model of rhythmic movement over time based on harmonic Fourier series and removes the constant acceleration assumption. The estimated phase and frequency of the motion also allow the proposed approach to segment the motion into repetitions and extract useful features such as gait symmetry, step length, and mean joint movement and variance. The algorithm is shown to outperform the EKF in simulation, on healthy participant data, and stroke patient monthly assessments. For the healthy participant marching dataset, the R-EKF improves joint acceleration and velocity estimates over regular EKF by 40% and 37% respectively, estimates joint angles with 2.4 degree RMSE, and segments the motion into repetitions with 96% accuracy. While the proposed R-EKF effectively segments rhythmic rehabilitation movement such as gait, not all rehabilitation motions are rhythmic or may have uneven delays between repetitions by regimen design or due to fatigue. For such motions a time-series segmentation as data point classification algorithm is proposed. Common dimensionality reduction and classification techniques are applied to estimated joint angle data to classify each time-step as a segment or non-segment point. The algorithm is tested on five common rehabilitation exercises performed by healthy participants and achieves a segmentation accuracy of 82%.