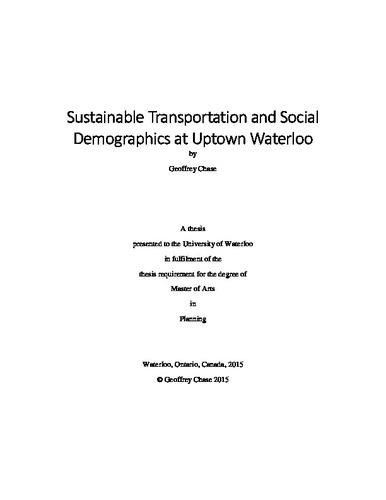 This thesis investigates how the use of a mid-size city’s core is related to the transportation preferences and socioeconomic status of its residents. Uptown Waterloo was chosen as a study site because, in addition to its social and economic functions, it is intended to be the centre of the city’s active and public transportation networks. As such, it is important to planners and policymakers to assess not only how widespread the use of sustainable transportation is among Uptown shoppers, but also how equitable it is. Online and in-person surveys of Uptown shoppers were administered in summer 2014 to determine the social profile of an Uptown shopper, the transportation methods used to reach Uptown, and the types of activities performed during a visit. Respondents showed a strong preference for sustainable transportation methods, with only 28% visiting Uptown most frequently by car. Moreover, people who bicycled or walked to Uptown were found to have comparable spending habits to drivers but visited the site more times per month. The respondents were on average younger, more affluent, and more drawn to jobs in the knowledge economy than the social demographics of the Waterloo region can account for. A significant relationship between travel mode choice and economic status was observed: drivers were most affluent on average and public transit users the least, while methods of active transportation were more socioeconomically heterogeneous. Although the demographic profile of Uptown shoppers is consistent with indicators of social gentrification, the findings suggest that the City’s ongoing promotion of sustainable transportation supports Uptown’s businesses as well as a broad range of its visitors.