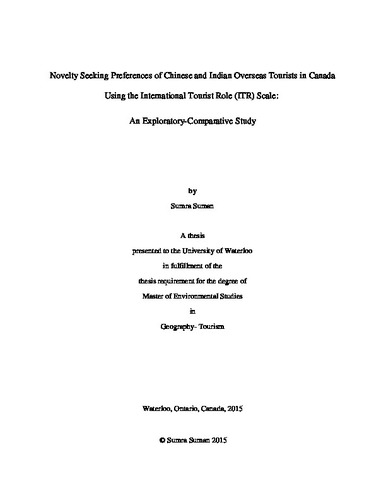 The concept of novelty seeking has been used by over decades to study consumer behaviour in tourism. Cohen (1972) differentiated international tourists based on the degree to which they seek novelty in their travel experience, through four categories: Drifter, Explorer, Individual Mass Tourist and the Organized Mass Tourist. However this was a conceptual classification for which further methodological refinement in quantitative terms was recommended by Cohen in 1974. The 20-item International Tourist Role (ITR) Scale designed by Mo, Howard and Havitz (1993) is an extension of this concept, based on three different dimensions: Social Contact Dimension, Travel Arrangement Dimension and Destination Oriented Dimension. Jiang et al. (2000) validated 16 of the 20 items as reliable for investigating travel preferences of American tourists. Originally, written in English, the need for cross-cultural validation of this scale in a foreign language, led Spiers (2005) to translate these 20 items in French language and successfully segment French and French Canadian international tourists into five distinct clusters. Thus, the realization that cultures can vary significantly in terms of tourist motivations in these three separate investigations and the need to further validate the scale in other languages/cultures formed the research gap for this current study. As worldwide tourism arrivals are expected to reach 1.8 billion by 2030, emerging market destinations are expected to generate and accommodate much of this growth. According to Tourism Industry Association of Canada, China (29.4%) and India (18.8%) ranked number 1 and 2 as the top 2014 performance markets leading to a +11% growth in Canada’s GDP in 2014. Given their historical and demographic similarities, and the fact that both these countries are now dominating the Canadian outbound tourism market, inspired this current research into studying the travel preferences of Chinese and Indian international tourists in Canada by translating the 20-item ITR scale into Mandarin and Hindi language. Data were collected from 220 Mandarin and Hindi- speaking overseas tourists over a series of weekends in the month of December 2014 at the CN Tower, Toronto, Ontario, Canada. A purposive sampling technique along with distribution of a self-administered questionnaire was utilized by Hindi-speaking bilingual researcher and a Mandarin- speaking bilingual research assistant. The questionnaire including the 20-item ITR scale was translated into Mandarin and Hindi with the help of bilingual translators using the back translation method. Quantitative analysis of the data was conducted using statistical procedures SPSS 22.0. Results suggested the reliability of the scale’s three dimensions and 18 items for studying Mandarin and Hindi- speaking overseas travelers. The ITR scale proved useful in segmenting Chinese and Indian overseas travelers into five distinct clusters: High Familiarity Seekers, Destination Novelty Seekers, Guided- Trip Seekers, Social Contact Seekers and High Novelty Seekers. Four of these five clusters were consistent with one or more previous analyses conducted using the ITR scale. Implications of the study for tourism sectors such as DMOs, hotel industry, travel agencies etc. are presented along with limitations of the present study and recommendations for future research. Overall, this research represented an extension towards growth of emerging tourist markets research and served as a much needed validation of the ITR scale in a cross cultural setting.