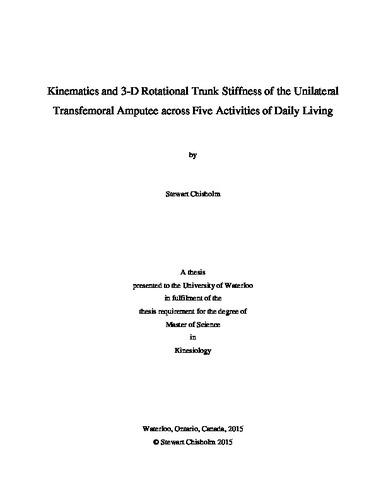 Review: Research examining trunk biomechanics in the transfemoral amputee population has only recently begun to include analysis of trunk muscle activity. Based on the absence of knee extensor muscles in the prosthetic limb, the muscles of the hip and trunk will demonstrate compensatory activity. This is an important area of research given that there is an increased incidence of low back pain among transfemoral amputees. Purpose: The overall purpose of this thesis was to explore movement compensations exhibited by unilateral transfemoral amputees throughout a series of activities of daily living, with a focus on trunk biomechanics. Rotational trunk stiffness, and spine and lower limb kinematics were recorded and used to identify areas of difficulty and/or risk of injury and low-back pain. Methods: Twelve total control participants and four amputee participants participated in this study. The tasks recorded included gait, step down, step up, sit-to-stand, and door pull. Lower limb and trunk angles, and trunk and hip muscle electromography were recorded for each participant, and these data were used to model 3-dimensional rotational trunk stiffness about the L4-L5 joint. These data, including individual muscles’ percent contribution to the overall stiffness, were compared between tasks and between subject groups. Results: During the gait task, amputees’ frontal plane stiffness was greater during prosthetic single support phase in the absence of a load-bearing cane. When stepping down, non-cane using amputees displayed a flexed trunk at impact, and only the microprocessor prosthesis displayed knee flexion after contact. The step up task resulted in greater lateral trunk bending and stiffness from the amputee group. The amputee participants also showed more sustained trunk stiffness throughout the sit-to-stand task, with a local peak at seat-off. Conclusions: The altered movement and stiffening patterns of the transfemoral amputees were in an effort to increase trunk stability and mitigate risk of injury. It was concluded that, during some tasks, an increased stiffness is required from amputees to perform the same movement as the control group. The most at-risk tasks are the step down and sit-to-stand tasks, though other tasks also displayed characteristics linked to low-back pain.