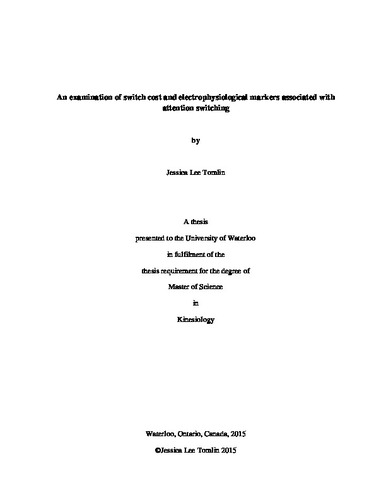 In this age of advancing technology, people often perform multiple tasks at the same time, which actually requires either dividing or switching attention. The ability to switch attention between two tasks is used often in daily life and the timing of switching can be critical. When switching attention, there is a behavioural switch cost, measured as delays in reaction times. It is important to understand the mechanisms of the switch cost to better address age and disease related changes in attention switching. This thesis, comprised of two studies, investigated the behavioural and electrophysiological aspects of attention switching and the resulting switch cost in young healthy adults. Study 1 evaluated an approach to measure switch cost with temporal precision when switching attention between tasks of two modalities and determined the relationship between task challenge and switch cost. This approach involved a background auditory choice reaction time task and switching to a visual reaction time task at an unpredictable time point. Results revealed, in contrast to the hypothesis, that as the task difficulty increased, the switch cost decreased. Study 2 used electroencephalography to examine differences in an event-related potential, the P3, when switching attention to probe the underlying neurophysiology of the switch cost. When comparing switch and non-switch trials, P3 latency was longer in switch trials, but there was no difference in P3 amplitude. This indicates that when switching, there are other possible processes that are associated with the delay in the P3, such as disengagement, which could involve the updating of the mental representation of the task in working memory and this is revealed in the switch cost. Future work could investigate task switching performance using this paradigm in other populations such as older adults and those with certain neurological disorders as well as investigating switch cost components (eg disengagement) in more detail.