Conservatism and British imperialism in India: finding the local roots of empire in Britain and India 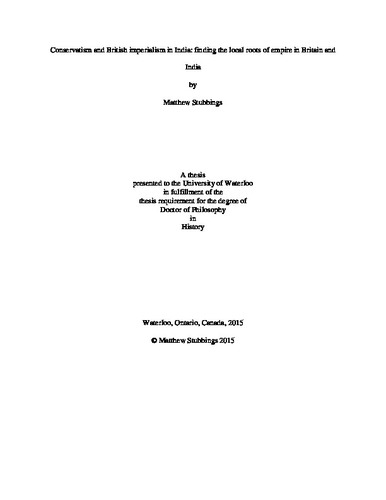 This thesis explores the importance of political conservatism in shaping the ideological and political foundations of British imperialism in India between 1857 and 1914. From the Indian Revolt to the rise of Indian nationalism, it examines how British and Indian conservatives attempted to define a conceptual and institutional framework of empire which politically opposed liberal imperialism to the First World War. It relies upon a biographical analysis to examine how intellectual configurations defined distinct political positions on Indian empire. This study reveals the extent that local conservative inclination and action, through political actors such as Lord Ellenborough, Benjamin Disraeli, Lord Mayo, Lord Lytton, the Kathiawar States, Roper Lethbridge, and M.M. Bhownaggree, shaped public and partisan discourse on empire. It argues that British and Indian conservatives evoked shared principles centered in locality, prescription, and imagination to challenge, mollify, and supplant the universal and centralizing ambitions of liberal imperialists and nationalists with the employment of pre-modern ideas and institutions. It is argued that this response to liberalism conditioned their shared contribution and collaboration towards an imperial framework predicated principally upon respecting and supporting local autonomy and traditional authority in a hierarchical and divided India. This formulated political positions and policy on Indian empire which advocated for the state’s primacy, paternal local authority and property obligation, and veneration for the transcendent qualities of tradition and religion. Moreover, this framework conditioned a challenge to a European civilizational definitions of race and identity, with an incorporative and vertical identity and subjecthood determined by a state’s, group’s, or individual’s national belonging as well as loyalty and obligation to the Crown.

Matthew Stubbings (2015). Conservatism and British imperialism in India: finding the local roots of empire in Britain and India. UWSpace. http://hdl.handle.net/10012/9766