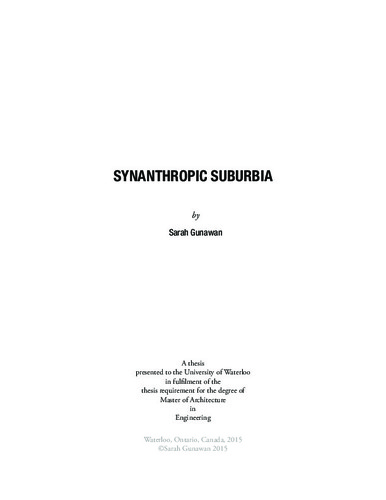 Animals are invading the city. Coyotes are sighted on downtown streets with greater frequency, raccoons notoriously forage through greenbins as their primary source of food, and all forms of animals inhabit the surfaces, edges and cavities of the built environment. Once wild animals are now adapting to the urban ecosystem and a new human animal relationship is emerging. Between the domestic and the wild are the synanthropic species, defined as animals who benefit from living in close proximity to humans yet, remain beyond their control. Since these animals are neither beloved pets, nor wild beasts, synanthropes are often deemed pests. However, they are the urban mediate, capable of living alongside the pervasive human population by adapting to anthropogenic behaviours and environments. As the conceptual division between city and nature dissolves, architecture is called upon to negotiate the physical boundary between human and synanthropic animal. Synanthropic Suburbia therefore reimagines human animal interactions, using architecture to structure hybrid relationships that positively contribute to the urban ecosystem. The thesis is positioned within a landscape of rapid ecological transformation – the suburbs – and engages the space of greatest tension between human and animal – the domestic territory of the house. The objective is to explore the potential for architecture to incorporate habitat support into architectural form and landscape systems. The research and design methodology investigates the interrelationship between scales of design and ecological impact. How can the multiplication of small scale, architectural interventions influence large scale territorial systems and patterns? Synanthropic Suburbia seeks to answer this question through a series of telescoping design experiments that position six animal species as active players by engaging their habitat requirements, biological behaviours, and seasonal patterns. Three architectural prosthetics re-imagine conventional building components into hybrid systems that augment the single family home and define the physical interface between human and non-human species. The multiplication of the prosthetic systems engages the broader biological requirements of a species and integrates the spatial development patters to define new synanthropic suburban typologies. These syn-urban building blocks are then proliferated across the territorial scale to create a robust, novel ecosystem that is capable of supporting a diversity and density of human and non-human species. The design process seeks to unpack the interconnectivity between complex socio-ecological systems through the multiscale design of the suburban biome. In the current context of global urbanization and socio-ecological change, Synanthropic Suburbia takes the opportunity to restructure human biological and cultural relationships with non-human species. Animals are now equal citizens with the agency to contribute to the dynamic processes of production, consumption and inhabitation of the syn-urban biome. Synanthropic architecture blurs the spatial definition between human and non-human to maximize the mutual benefits of cohabitation. Eventually human perceptions could shift and more hybrid conditions of human-animal living could emerge, yet, one question will always remain, how close is too close?