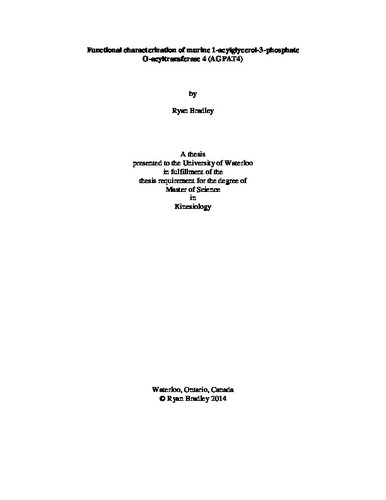 The human genome project has allowed for the rapid identification of a large number of protein families based on similarities in their genetic sequences. The acyl-glycerol phosphate acyltransferase (AGPAT) family of enzymes have been largely identified through sequence homology, with eleven isoforms identified in both mice and humans. Interestingly, very little work has been done on the characterization of AGPAT isoform 4. In the present study, I report the functional characterization of AGPAT4 as a lysophosphatidic acid acyltransferase. Although AGPAT4 is present in most tissues, I have found that it is abundant in multiple brain regions including olfactory bulbs, hippocampus, cerebellum, cortex, and brain stem, and is detectable in both primary neurons and glial cells. In assays performed in vitro, AGPAT4 significantly increased the incorporation of [14C]oleoyl-CoA into phosphatidic acid using lysophosphatidic acid as an acyl acceptor. AGPAT4 did not display significant acyltransferase activity with lysophosphatidylcholine, lysophosphatidylethanolamine, lysophosphatidylserine, lysophosphatidylinositol, lysophosphatidylglycerol, monolysocardiolipin or dilysocardiolipin acyl acceptors. Overexpressing AGPAT4 in Sf9 cells increased the total phosphatidylinositol content, but did not significantly affect levels of other glycerophospholipids, including phosphatidic acid. Analysis of the fatty acyl profile of PA from AGPAT4-overexpressing cells indicated increased individual saturated fatty acids, particularly lauric acid (C 12:0), and arachidic acid (C 20:0). AGPAT4 localized predominately to the mitochondria, and was also regulated during embryogenesis, and in varying metabolic states. In summary, this thesis has characterized AGPAT4 as a lysophosphatidic acid acyltransferase with a potential role in mitochondrial function.