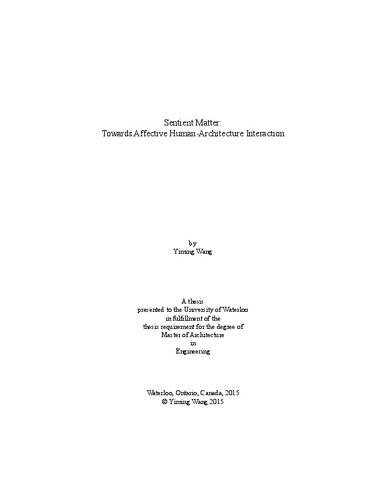 Interactive design has been embedded into every aspect of our lives. Ranging from handy devices to architecturally scaled environments, these designs have not only shifted the way we facilitate interaction with other people, but they also actively reconfigure themselves in response to human stimuli. Following in the wake of interactive experimentation, sentient matter, the idea that matter embodies the capacity to perceive and respond to stimuli, attempts to engage in a challenging arena that few architects and architectural researchers have ventured into. In particular, the creation and simulation of emotive types of interaction between the architectural environment and its inhabitants. This ambition is made possible by the collaboration of multiple disciplines. Cybernetics, specifically the legacy of Pask’s conversation theory, inspires this thesis with the question of why emotion is needed in facilitating human–architecture communication; why emotion appraisal theory (P. Desmet) within psychology supports the feasibility of an architectural environment to elicit emotional changes on its participant as well as the possibility of generating a next-step response by having the participant’s emotive behaviors observed; and why movement notation systems, especially Laban Movement Analysis (a movement rating scale system), helps us to understand how emotions can be identified by motion elements that signify emotive behavior. Through the process of decomposing movement into several qualitative and quantitative factors such as velocity, openness, and smoothness, emotions embodied in motion can be detected and even manipulated by altering those movement factors. Moreover, with the employment of a Kinect sensor, live performance can be analyzed in real time. Based on the above research and inspired by the Kinetic sculptures of Margolin, the final product of this thesis is the development of a prototype that translates human movements that are expressive of emotion into continuous surface transformations, thus making evident how such emotive states might be transcoded into an architectural form. In this process, four typical emotive architectural expressions—joy, anger, excited, and sadness—are researched. This thesis also documents three virtual scenarios in order to examine the effect of this interactive system. Different contexts, kinetic types, and behavioral strategies are presented so that we may explore their potential applications. Sentient matter outlines a framework of syntheses, which is built upon the convergence of embedded computation (intelligence) and physical counterpart (kinetics). In the entire process, it considers people’s participation as materials that fuel the generation of legible emotional behaviors within an architectural environment. Consequently, there is potential for an architectural learning capacity coupled with an evolving data library of human behavioral knowledge. This opens doors for futuristic designs where the paradigm shifts from “What is that building?” to “What is that building doing?”