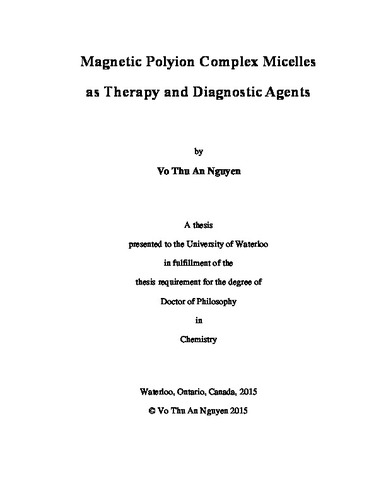 This Ph.D. dissertation describes the synthesis of superparamagnetic iron oxide nanoparticles (SPIONs) designed to serve as magnetic resonance imaging (MRI) contrast agents and for heat generation in cellular radiofrequency magnetic field hyperthermia (MFH) treatment. Control over the size and size distribution of the iron oxide nanoparticles (NPs), and thus over their magnetic properties, was achieved using a G1 arborescent copolymer (comb-branched (G0) polystyrene substrate grafted with poly(2-vinylpyridine) side chains, or G0PS-g-P2VP) as a template. Good colloidal stability and biocompatibility of the SPIONs were achieved via the formation of polyion complex (PIC) micelles with a poly(acrylic acid)-block-poly(2-hydroxyethyl acrylate) (PAA-b-PHEA) double-hydrophilic block copolymer. The formation of SPIONs was first attempted using preformed PIC micelles as templates. Complexation of the PAA segment of PAA-b-PHEA with G0PS-g-P2VP was achieved in water over a narrow pH range to produce dynamic, unimolecular PIC micelles stable in neutral pH buffers such as cell growth media. Control over the size and structure of the PIC micelles, from large flocculated species to stable unimolecular entities with hydrodynamic diameters ranging from 42 to 67 nm, was accomplished by tuning the density of the polymer stabilizing layer surrounding the G1 core. Evidence for the formation of uni- vs. multimolecular structures was provided by dynamic and static light scattering measurements, while the core–shell morphology of the micelles was confirmed by atomic force microscopy (AFM) phase images. Unfortunately, the preformed PIC micelles did not perform well as templates for the in situ synthesis of SPIONs. An alternate procedure was developed using the G0PS-g-P2VP copolymer as a template to control the size and size distribution of the iron oxide NPs, as evidenced by transmission electron microscopy (TEM) imaging. The colloidal stability of the G1@Fe3O4 magnetic nanoparticles at pH 7 was improved by subsequent complexation with PAA-b-PHEA, to produce magnetic polyion complex (MPIC) micelles with a hydrodynamic diameter Dh = 130 nm and a polydispersity index PDI = 0.136. Vibrating sample magnetometry was employed to reveal the superparamagnetic character of the Fe3O4 NPs, but also to investigate the influence of the Fe/N templating ratio, the temperature, and of the PAA-b-PHEA coating on their magnetic and relaxometric properties, and to demonstrate the possibility of tuning these properties via the synthetic conditions used. The results obtained were compared for samples in their bare state and after coating with the block copolymer, and with litterature values for relaxometric vs. magnetic and TEM measurements. The SPIONs synthesized in this work had values of transverse relaxivity of up to r2 = 335 s-1mM-1, and a transverse-over-longitudinal relaxivity ratio r2/r1 = 31.4 (1.47 T, 37 °C), comparable with or even larger than for commercial products, suggesting their efficiency as negative contrast agents for T2-weighted imaging. The estimation of the volume fraction of Fe3O4 inside the polymer micelles yielded a number of ca. 12 magnetite crystallites per micelle, comparable with the AFM and TEM observations. Moreover, a maximum SAR value of 55.6 W/g was measured by alternating magnetic field (AMF) calorimetry at f = 755 kHz, Hmax = 10.2 kA/m. The dependence of the SAR values on the magnetic field amplitude H and the frequency f was also examined. The cytotoxicity and cell internalization of the PIC and MPIC micelles were evaluated in vitro. Cell internalization was visualized by confocal laser scanning microscopy and TEM, and quantified by fluorescence-activated cell sorting. The usefulness of MPIC micelles for cellular radiofrequency magnetic field hyperthermia was also confirmed, as the MPIC micelles had a dose-dependent effect on cell viability. At the maximum incubation dose (1250 μg/mL iron oxide), the lowest cell viabilities were observed with an applied AMF: about 46–57% after 1.5 h of treatment, and 30–35 % after 3 h for the L929 cell line. We verified the hypothesis that AMF excitation of the intracellular MNPs was the main factor leading to programmed cell death (apoptosis), even in the absence of macroscopic heating.