Social Experiments in Innovative Environmental Management: The emergence of ecotechnology 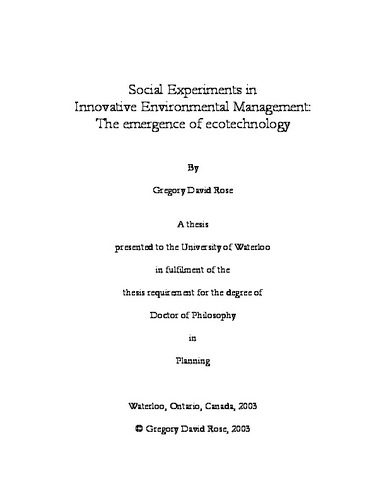 Human production needs are met through the use of modern technology that is increasingly recognised as a threat to the planetary ecosystem and social sub-system. In light of this recognition, there is evidence that a planned transition towards more sustainable technological infrastructure is occurring across various production sectors. This change is often associated with re-orientating technology based on the concept of sustainable development and national-level strategies such as <i>ecological modernisation</i>, which prescribes phasing-out environmentally malignant conventional technology for cleaner post-industrial solutions. There is evidence, however, that a transition towards cleaner technological options is occurring at the local level. In southern Ontario, Canada ecological technology (<i>ecotechnology</i>) has been adopted in small-scale agricultural and educational facilities for the management of manure and domestic sewage. Ecotechnology is designed to meet human production requirements and to restore the environment through combining natural systems and engineered components to achieve cleaner production. Two types of ecotechnologies were investigated during this research: <i>constructed treatment wetlands</i> for the management of manure and <i>greenhouse-based biological technologies</i> for the management of domestic sewage. These options are novel and can be expected to encounter barriers resulting from a <i>selection environment</i> favouring pre-existing technological options that have previously become established. The overall objective of the research was <i>to identify key factors both driving and constraining the adoption and implementation of the ecotechnology</i> across four case studies. This objective was accomplished through employing a qualitative, collective case study approach. The case studies revealed the motivation behind the adoption of the ecotechnology arose from the environmental values of users and formed the basis for rejecting the conventional options because they were not viewed as capable of improving the environment. However, the ecotechnology also exceeded user's aesthetic and operational level expectations. Barriers to the implementation of ecotechnology were also identified. The investigation revealed the existence of a <i>perspective-gap</i> between the ecological engineering science and traditional engineering science, which constrained implementation of the ecotechnology. Skepticism was found to arise due to the unique performance parameters and <i>soft</i> operational characteristics of ecotechnology, which contrast the <i>hard</i> technological fixes that are familiar to traditional engineering science. This perspective-gap may account for the institutional inertia, which became clear after the 1996 provincial budget reductions decreased the level of support for research and environmental technology development programs in Ontario. These reductions also devolved authority for small-scale wastewater treatment to the municipal level where lack of technical expertise and reliance on standardised regulations has constrained the development of alternatives. Constructive technology assessment suggests that the development of technology must be guided in cooperative <i>social learning</i> processes capable of reflecting the needs and values of stakeholders in order to achieve beneficial social and technological change. Evidence from the case studies revealed that a significant amount of capacity was developed when stakeholders collaborated and legitimated the <i>social experiments</i> where the ecotechnology was applied. These experiments demonstrate the significance of creating settings where users, technology proponents and provincial and local approval agents can collaborate. Through collaboration, social learning can be facilitated during the development of alternative technological solutions that may be congruent with ecological modernisation and the re-orientation of technology towards options that are ecologically-oriented.