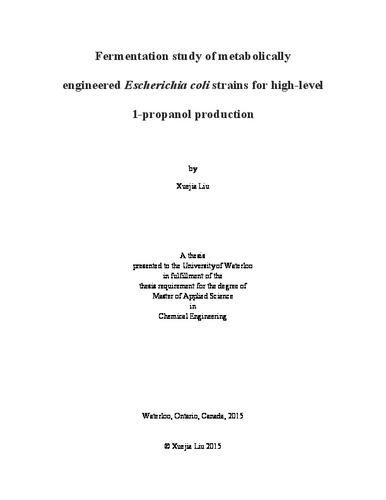 As the current global energy requirements are mainly met through the combustion of petroleum, coal, and natural gas, concerns over the global warming and the sustainability of the future exploitation of fossil fuels are growing. 1-propanol of which carbon chain is longer than the ethanol could be a better biofuel for blending with gasoline. Previously in our lab, a novel alternative 1-propanol biosynthesis pathway was constructed by introducing the sleeping beauty mutase (Sbm) operon into the native E.coli. During the anaerobic cultivation of a metabolically engineered E.coli strain in a shake flask, approximately 150 mg/L of 1-propanol was produced using glucose as the main carbon source. In this study, we demonstrated high-level production of both 1-propanol and ethanol by fermenting our novel metabolically engineered E. coli strains anaerobically with glycerol/glucose as the main carbon source. In a batch fermentation of a wild type E. coli stain harboring a low copy number plasmid with an active Sbm operon, low concentration of 1-propanol was detected in the culture media. By knocking out the gene involved in the major carbon flux competing pathway (ldhA), the titer of 1-propanol was increased by four-fold. Due to glucose’s limited NADH-generating capacity, glycerol, which is a more reduced compound, was used as the main carbon source, and the 1-propanol titer reached 2.15 g/L and 4.12 g/L from 30 g/L and 87 g/L of glycerol, respectively. Further enhancement in the 1-propanol production was achieved by constructing a plasmid-free propanogenic E. coli strain that had a faster glycerol dissimilation rate and higher 1-propanol yield. In summary, 7.52 g/L and 35.66 g/L of 1-propanol and ethanol, respectively, was produced from 116 g/L of glycerol in a fed-batch cultivation of the plasmid-free propanogenic E. coli strain.