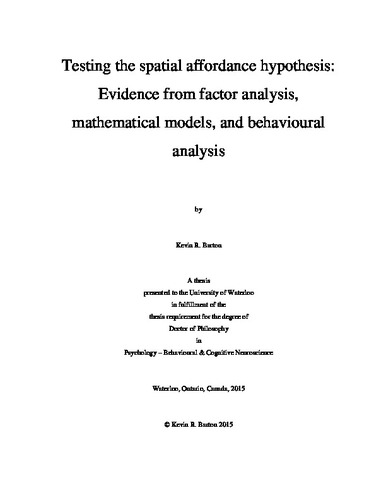 This thesis attempts to explain the apparent link between how we navigate the world around us and the physical properties that define that world. Despite a number of works indicating the substantial effect of the layout of the environment – both as a whole and within a viewpoint – no work to date has directly attempted to address how and what physical properties shape our navigation through space. This research question is examined in the context of a direct relationship between the physical environment and our movement choices – an affordance. To test this idea, the question is approached from the ground up using a combination of spatial analysis, mathematical modeling, and behavioural analysis, to reveal that a small family of local perceptual variables, but particularly that of mean surface depth, is capable for accounting for much of our movements in space, even when the environment is largely disorganized. Using Factor Analysis (Chapter Two), three studies using data drawn from both artificial and real-world spaces reveal a critical link between the local perceptual characteristics of the environment and properties and the complexity of space lying outside the local perceptual space. Chapter Three explores the capacity of these specific local perceptual variables to guide navigation behaviour in a way that is consistent with the concept of an affordance. Across all approaches, the variable of mean surface depth is shown to both systematically relate to the layout of the world around us and guide our movement choices within that world. In establishing this affordance – Depth Afforded Navigation – a novel link between studies of local perception and the layout of space can be established and built upon in future work. This work not only sheds new light on how common patterns of navigation behaviour occur, but also allows the often disparate approaches (i.e., space syntax, isovist analysis, angular segment analysis, etc.) used to understand the role of space to be understood under one unifying model.