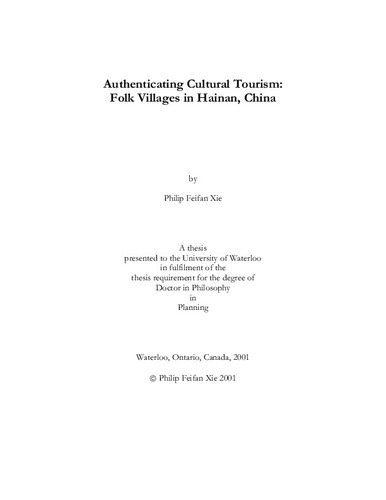 Cultural tourism provides opportunities for ethnic minorities to showcase their cultures, customs and heritage. At the same time, it causes a series of tensions and issues of authenticity and commodification have been the subjects of lively debate among tourism researchers. However, little research has been done to date concerning the roles of stakeholders who authenticate cultural resources. This thesis develops a conceptual framework that is employed to enhance understanding of the authenticity of cultural tourism when ethnic Li communities in Hainan Island, China, experience tourism development. Folk villages are used as a significant point of access for investigating the tensions which emerge in authenticating cultural resources. Four key stakeholders are identified: (1) governments; (2) tourism businesses; (3) visitors; and, (4) ethnic communities. Five pairs of yardsticks were developed based upon Swain's (1989) work to examine the issue of authentification. These constructs are: non-commercialization versus commodification, cultural evolution versus museumification, economic development versus cultural preservation, ethnic autonomy versus state regulation, and mass tourism development versus sustainable cultural tourism. The findings suggest that authenticity is relative rather than absolute and, like beauty, is in the eye of the beholder. Therefore, it is necessary to shift from a previous focus on the nature and identification of authenticity to the more tractable question of authentification. The various stakeholders exhibit different positions with respect to the various paradoxes and the tensions that exist between their poles. For example, governments pay more attention on the control of ethnic autonomy whilst tourism businesses prioritize the economic development. Tourists exhibit blurred perceptions of authenticity whilst ethnic minority supports the maintenance of their of culture but gives priority to jobs and remuneration. This thesis demonstrates that it is more useful to evaluate who authenticates and the interests that such claims serve, rather than to adhere to some absolute standard of 'authentic' ethnicity. It makes recommendations for tourism planners, such as ethnic participation in the decision-making process, the development of strategic alliance among tourism stakeholders, and the taking of steps to promote the maintenance of Li culture. It also suggests opportunities for applying this conceptual framework of cultural tourism to other different situations, both within Hainan and elsewhere.