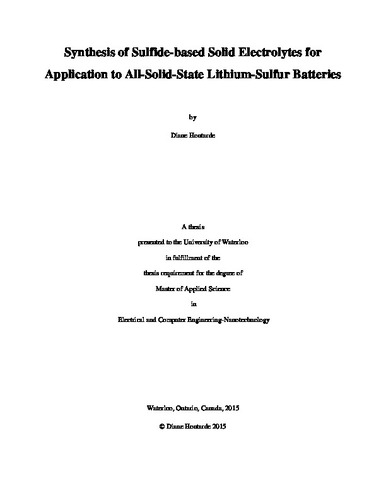 Lithium–sulfur batteries are a promising candidate to support the demand for high energy density storage systems. The active material is sulfur, which presents the advantages of being abundant on earth, thus inexpensive, and environmentally friendly. However the use of conventional organic liquid electrolytes in these batteries prevents them from being commercialized, because of many technical problems that have yet to be overcome. One of the major issues is the polysulfide shuttle which leads to fast decay of cell performance. A solution is to use all-solid-state batteries instead, thus removing the inherent hazards to liquid batteries such as flammability and leakages. The drawbacks for all-solid-state are the increase in resistance of the electrolytes, the deterioration of the electronic and ionic pathways at the solid/solid interfaces, and the expensive processes and designs for their manufacture. In this thesis, research is carried out in an attempt to find new superionic conductors for solid electrolytes, improve on known conductors, and investigate the performance of all-solid-state cells using different fabrication methods and morphologies. In the first part of this thesis, the parameters influencing the synthesis of the well-known super-ionic conductor Li7P3S11are studied, in order to establish a more systematic method to produce this metastable phase at larger scales. Then, new crystal structures are uncovered in the 67.Na2S-33.P2S5 glass system. After thermal and spectroscopic analyses, it seems that these phases might be polymorphs of the known phase Na4P2S7, although its crystal structure has never been reported before. Finally, a completely new phase, Li2NaPS4, is synthesized and characterized by XRD, Raman spectroscopy, and electrochemical impedance spectroscopy. In the second part, the performance of all-solid-state batteries is analyzed depending on the solid electrolyte used, and the composition and architecture of the composite cathode. First, two batteries are compared- using Li7P3S11 and Li10GeP2S12 (LGPS) solid electrolyte respectively. The Li10GeP2S12-based cell proved superior capacity, but poor cyclability and rate capability, and investigation showed that the material decomposes in side reactions providing extra capacity. Then in the composite cathode, two different carbons, Activated Carbon (AC) and KetjenBlack (KB), and two different ionic conductors, Li1.5PS3.25 and LGPS, are compared with each other respectively. At low cycling rate, the best performance is obtained for materials which achieve higher contact area (higher surface area for carbon: AC, and higher coating and ductility for solid electrolyte: Li1.5PS3.25). However, for high rates and high rate change, conductivities are the most important characteristic to enable fast transfer of the carriers at the interface of the active material. Thus, better performance was observed for KB for the electronic conductors, and for LGPS for the ionic conductors.