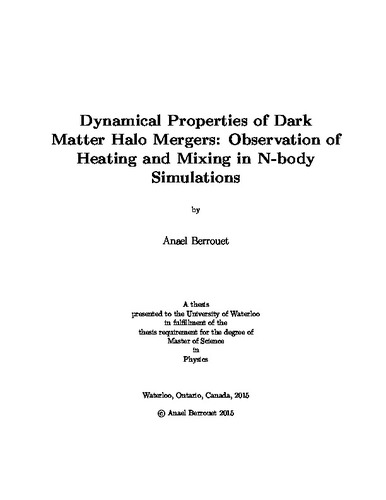 This thesis examines the nature of mixing and heating during the merging of single, isolated dark matter halos, as well as a short discussion of the statistical nature of repeated mergers in a cosmological setting. A small set of gravitational \N-body" simulations of halo mergers are used to study heating and mixing, by measuring the dynamical properties of individual particles, as well as the overall properties of the merging halos. The accretion of mass onto a host halo is known to change the overall structure of the halo. Many previous studies have determined the general effect of mass accretion on the structure of the halo in general, and the concentration parameter in particular. Changes in this concentration parameter over the course of the merger are measured as a function of the mass of the incoming satellite and the circularity of the satellite's orbit. The amount of self-mixing in the radii and energies are also examined in order to determine the amount of memory preserved in the host halo throughout merger, as well as the amount of phase-space mixing between the host and satellite halos. Three possibilities are considered when observing how the host and satellite are mixed: that new material is layered onto the outside of the host halo and that new material falls into the center of the host halo, and that new material is evenly distributed throughout the host. Halos are found to be unevenly heated by in-falling material. The heating overall tends to make the halo expand and experience a drop in its concentration parameter due to the increase in scale radius. Examining the cumulative mass distribution and the density pro le of each halo through time, it is clear that material from the core is transported to larger radii during the merger. The scale radius presents the most relevant parameter with which to measure heating, as it represents the extent of the core of the halo. The relative increase in this observable appears to have non-trivial dependence on the mass ratio of the merging halos. We develop a simple model which provides the ability to estimate the change in the scale radius as function of the mass ratio of the merging objects. The model does not take circularity, or the total energy of the orbit into consideration, but the orbital energy of each orbit is representative of cosmological energies expected and any dependence on the circularity is actually extremely weak. Future work will examine the particular nature of these dependencies. Mixing within the host is found to be relatively inefficient, with a maximum mixing leading to a rank correlation of approximately 0:7 in radius and 0:65 in energy. This relatively small amount of mixing is even less visible when particles are binned in to radial shells, explaining previous findings of very little mixing in the literature. We also investigated the nature of phase-space mixing, that is mixing in position-velocity space, between the host and satellite halos. We expected a certain amount of phase-space mixing among the merging structures, due to the fact that they must overlap spatially, and that exchanges of energy would bring their velocity distributions closer together. Overall, merging halos will tend towards equipartition of their energies through dynamical friction. We nd that phase-space mixing is most e cient at mass ratios close to 1:1. The distance between the phase-space distributions of each halo, as measured by a statistic outlined in this work, is found to be anti-correlated to the mass ratio. Finally a few simple applications to previous work performed by Wong & Taylor (2012) as well as Fakhouri & Ma (2008) is replicated. Using the mass accretion histories developed during this work, the heating model is applied to the mass accretion histories in order to build a theoretical concentration distribution prediction for halos at redshift z = 0.