Characterizing controls on plot-scale evapotranspiration and soil water dynamics of a constructed fen in the Athabasca Oil Sands Region, Alberta 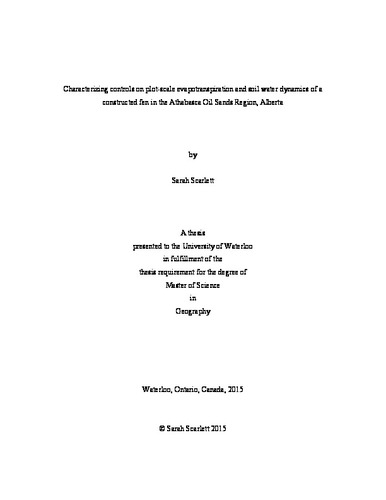 In the Athabasca oil sands region of the Western Boreal Plains (WBP) mining companies now recognize the importance of reclaiming peatlands, as they cover > 50% of the pre-mined regional landscape. Open-pit mining operations require the removal of overburden, which is the surficial soil and vegetation overlying the oil-bearing formation. As a result, mining processes leave an unnatural, undulating landscape, which promotes the establishment of ecosystems non-native to the region. To date, oil sands wetland reclamation efforts have focused on marsh and open water wetlands. However, these wetland systems are not abundant in the sub-humid climate of the WBP due to high evaporative demand from free water surfaces. Despite their abundance on the landscape, the re-establishment of peatland ecosystems had not been previously tested due to their complexity and long successional development. However, the importance of these ecosystems was recognized by Alberta’s Environmental Protection and Enhancement Act (EPEA), which mandated mining companies to test peatland reclamation. As a result Suncor’s Nikanotee Fen, an experimental fen and watershed constructed as part of the landscape reclamation, was completed in 2013 and engineered with the intent to support natural fen vegetation and hydrologic processes. During the initial years post-construction, the influence of the experimental planting design on the fen’s hydrology is unknown. Therefore, plot-scale evapotranspiration (ET) and soil water dynamics were monitored at various mulched and unmulched vegetation plots (control, moss, seedlings; n = 31) across the fen, including ponds. Treatments types were found to influence available energy and thus ET, with highest rates over open water (4.4 mm/day) and lowest rates over moss-mulch plots (2.4 mm/day). Mulch reduced ET by lowering the vapour pressure deficit within the mulch layer, thus providing a favorable microclimate for moss establishment by elevating near-surface relative humidity and reducing air and soil temperatures by ~2°C. Plot-scale ET trends followed ponds (331 mm) > seedlings (294 mm) > seedling-mulch (273 mm) > control (246 mm) > moss (212 mm) > moss-mulch (179 mm), where cumulative seasonal ET exceeded cumulative precipitation (132 mm) in all plots. While plot type was found to influence ET losses, it did not show a significant control on soil water dynamics in this study. While there were slight water deficits (P-ET) and lower soil moisture contents in mulched plots, probably caused by precipitation interception, the specific effects of mulch on plot soil water dynamics are difficult to elucidate due to significant differences in plot water table levels (p < 0.05). Water table variability was directly related to surface elevation, which differed between plots by ~ 24 cm. Despite a relatively small range in elevations, plot water table positions varied > 20 cm bgs, where plots located at higher elevations had consistently lower and more variable water tables. Furthermore, the salvage and placement methods of the peat created highly heterogeneous peat properties across the fen, which significantly differed with location across the fen (p < 0.05). Therefore, the high variability in the hydrophysical properties and surface elevations, thus water table position, likely masked the effects of vegetation and treatment type on plot hydrology.