Including Ramping Constraints in the Electric Capacity Expansion Model 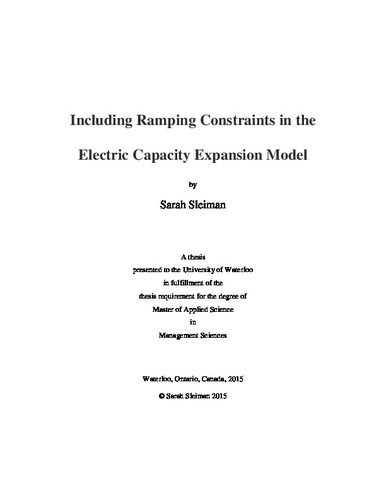 In the long term electricity capacity expansion problem, operators attempt to make decisions years ahead of time on what generator types to invest in in order to meet future electricity needs. In such a model an approximate electricity demand forecast is used. Furthermore, short term generation variables such as ramping capabilities are ignored and reserved for short term planning models. Such simplified long term models have historically yielded good results due to the straightforward nature of operational details that are mainly related to fairly predictable demand patterns. With the increasing penetration of less predictable renewable energy sources however, operators of a system are expected to need to respond to added variability on the supply side of the system. Generators within a system will also need to have the ability to meet such variability and will potentially require higher ramping capabilities in order to respond to the intermittency of renewable energy sources. The work in this thesis illustrates that capturing short term constraints, such as the ramping constraints originally found in unit commitment models, in the long term capacity expansion model may result in a more realistic power output and capacity mix when planning future generation investments. Furthermore, a new set of constraints are also added to the model in an attempt to maintain some chronology that is required when dealing with the short term ramping constraints. Data from the Ontario Long Term Energy Plan (LTEP) and the Integrated Power System Plan (IPSP) is used for testing. In comparison with the original capacity expansion model, it is found that the inclusion of the ramping constraints yields a different investment plan that is concluded to be more realistic.